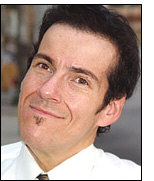 Paul Zenon, the original Fun Loving Criminal (other aliases include ‘King Con’ and the ‘Sultan of Swindle!’) is one of the U.K.’s leading comedy magicians with dozens of TV credits to his name including three recent hour-long one man ‘street magic’ specials screened by Channel 4. Paul has appeared in around thirty countries and in every conceivable location; from the Tropicana Hotel in Las Vegas to the hold of an aircraft carrier in the Adriatic, from the London Palladium to a clearing in the jungles of Belize and from the Magic Castle in Hollywood to the back of a truck in a Bosnia War Zone.

He is possibly the U.K’s busiest corporate entertainer and presenter. His client list is a Who’s Who in Blue Chip Companies and he has twenty years experience in performing in after dinner cabaret and hosting awards ceremonies and other audiences ranging in size from a dozen to thousands at top venues all over the world.

His act has been described as street-style magic played for laughs and as stand-up comedy with tricks. The magic is contemporary, amazing and funny, and his style is cheeky and irreverent but never offensive. The comedy is fresh, personalised and often improvised; adaptability being one of Paul’s strengths.

Recently you have seen Paul Zenon as a guest on Countdown. Now see him live at Southport!

Michael Vincent is a Classic Magician. Contrary to the current trend for urban and street magic, Michael embodies the teachings of history’s masters of magic, performing classic sleight of hand and making it relevant for the 21st century all delivered with style and panache. The magician’s magician Michael is the only person ever to have been named Best Close-Up Magician three times by The Magic Circle. A regular performer in Hollywood, he has been voted International Magician of the year and ranked world number 2 in a career that continues to demand his presence at celebrity parties, international casinos and high end corporate events. His stylish and sophisticated performance takes sleight of hand to an art form.

To achieve this level of excellence, Michael is self-disciplined, adhering to a strict daily rehearsal routine that involves hours of high-level concentration on all aspects of his performance. Studying the art of deception and close-up from his own perceptive, then from that of the audience, examining eye-line, body language and vocal intonation, his desire for perfection is paramount. Such dedication to his art is not always found in some of today’s performers.

It is therefore comes as no surprise that Michael was chosen to entertain the world’s greatest gathering of magicians in Sweden at the World Magic Championships.

Michael Vincent will be conducting a workshop at Southport. If card magic is your forte then you are sure that your technique and presentation skills will benefit from the advice of a maestro.

Les Bubb. To call Les Bubb just a mime act would do a gross injustice towards an energetic and enigmatic character, which for twenty years has been peddling his brand of inimitable mimicry and physical comedy all over the world to great demand. He’s a showman, mime, clown and high-spirited entertainer whose routines will leave you breathless. To quote Time Out he is ‘Dynamic and explosively funny’

He started performing at the National Youth Theatre and the Royal Welsh College of Music and Drama in the early eighties. Training continued at the Desmond Jones School of mime in London and in Paris with Phillipe Gaulier (Le Coq) and Etienne Decroux and his assistants. He quickly became popular with his unique brand of mime and contemporary clowning joining the ‘new wave’ of alternative comedy with contemporaries Ben Elton, Stephen Fry, Hugh Laurie, Lenny Henry and Harry Enfield.

Les is a phenomenon to be experienced. A cacophony of comical illusions, Les is one of the most innovative and accessible physical comics in the world.

Les Bubb will bring a new dimension and experience to a British Ring Convention.

Romany! Diva of Magic By Royal Appointment! This charismatic and glamorous artiste has performed before royalty and A-list Hollywood celebrities. A multi-lingual multi-talented lady who can turn her hand to whatever she wishes. From stilt walking to comedy knife-throwing Romany will wow you with her charm and her extraordinary prestidigitative abilities.

Hailed as a ‘flamboyant hybrid of Bette Midler, Mary Poppins and Tommy Cooper!’ this magical Diva has to be seen to be believed.

In 2006 Romany was chosen to entertain the Queen and her family and friends at the Ritz on the occasion of her 80th Birthday. 2007 starts the year by her being named The Magic Circle Stage Magician of the Year competing on stage against the best in the business. Before discovering and falling in love with the art of Prestidigitation, which she studied with the masters of McBride’s Mystery School and Master class in Las Vegas, Romany originally trained in dance, circus skills and theatre, graduating with a BA Hons. in English/Italian Literature.

Thoroughly influenced by 50’s Hollywood and the stars of Burlesque. Romany appears in elegant gowns or fabulous costumes, diamonds and feathers. What will she be wearing at Southport? To find out you will have to be there!

Paul Dabek is no stranger to regular British Ring Conventioneers. Occasionally there emerges an artiste who sets a new standard, someone who can lead instead of following, and someone who naturally has a style that is both original and commercial. Paul Dabek is one of those performers.

From a background of extensive theatrical experience, Paul has established himself as one of the rising stars in the magic world. His dynamic and high-energy style has earned him some of the highest titles in the field of magic. In 2003 The Magic Circle awarded him, the title of Young Magician of the Year. His winning our own Silver Shield followed this in 2006.

Audiences and critics alike have praised his skill and personality. As The Stage newspaper reported ‘Paul Dabek is quite simply superb, immaculately presented…a force to be reckoned with in his field’.

If you were not at Eastbourne you missed Paul’s performance. Don’t make the same mistake this year by being at Southport!

Ventriloquists are always welcome to our Convention stage and none more so than the immortal and evergreen Ray Alan. For nearly six decades he has been entertaining the masses with the monocled Lord Charles. Throughout this period he has never relinquished the accolade of being a top rated star.

Starting in the 1950’s Ray could continuously be seen touring the No1 circuit of the Variety Theatres. Sadly as these halls slowly eroded from the towns around the country, on television we were still able to enjoy the crisp irrelevant banter between Ray and Lord Charles. They were regulars on the B.B.C’s The Good Old Days and for HTV Ray created Ali Cat for the Magic Circle series in 1977. For two years he was the presenter of the B.B.C’s ‘Ice Show’.

Never appearing without Lord Charles he made many appearances on Game Shows such as Celebrity squares, Give Us A Clue, Family Fortunes, 3-2-1, and Bullseye. Ray still performs tours and also undertakes conference and corporate events. Here is the opportunity of seeing the act of a Master Ventriloquist. It is an act you will thoroughly enjoy.

These are only six of the 26 magical top liners who are coming to Southport in September. If you have not already done so make your registration for this outstanding Magic Convention. You can do so by downloading the registration form on this website and if you wish you can make payment by Paypal.