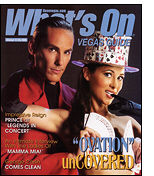 Two of the best of this country’s comedy magicians have been added to the list of artistes who will be appearing at Eastbourne. They are John Archer and Mel Mellers.

John Archer is recognised as a stand-up Comedy magician with a penchant for the visual pun and full-on audience combat with a mentalist slant. He attacks the audience with the skill and panache of a rampant bull and takes them on a roller-coaster ride of idiotic sight gags and baffling magic.

The genesis of John’s interest in magic started in 1981 when he was studying for a BA Honours degree in Industrial Design. He became noticed after teaming up with fellow member of the Middlesborough Circle of Magicians Mike Smith in an act called Archini & Smith winning the ‘Alistair Wand’ in the Ring’s stage competition in 1995.

Since becoming a solo full time entertainer in 1996, John’s newfound career has never faltered. Over the years he has had several prestigious awards conferred upon him. Be prepared to rock with laughter in your seats when John Archer emcees the Thursday Night Show.

Mel Mellors is just a hilarious comedy performer. He is a comedy magician with an unbelievably sharp wit. His act is completely original with a unique combination of intrigue and comedy. It is alive with action, laughter and mental challenges you just won’t believe.

As one of his client’s confirmed ‘The content and balance of your programme was judged to perfection, the mix keeping everybody alert. Had you chosen to entertain until breakfast the audience would have remained totally entranced’.

Mel Mellers is just one bundle of fun. You will love him.

‘Magic in the Corporate World’ is the title of the lecture to be given by Bill Herz. It is a lecture that will be immediately followed by a practical workshop. Bill is probably the most successful performing magician and Agent in magic booking all the great magicians including David Copperfield, Lance Burton, Mac King and many others for his numerous corporate clients.

At the age of 5 when most children were reading comic books, Bill was learning to shuffle a pack of cards with one hand. His distinctive mix of comedy and magic has been applauded throughout the North American, European and Asian continents. As a theatrical consultant Bill designs and creates special effects for Broadway shows, major motion pictures and television commercials.

Bill’s performances are always custom-tailored to the particular audience, his slick sleight of hand integrating audience participation, humour and unforgettable wizardry are what ensures every event is truly special.

As George Ort of the AT&T Telecommunications Corporation says of Bill ‘You are a fabulous magician and entertainer. Your ability to charm, surprise, and overwhelm the audience with your magic is without equal. It is no wonder that everyone present now wants to know how to get in touch with you’.

Bill Herz’s lecture and workshop will be hugely valuable to every working magician.

Our Executive Producer of the Convention Paul Stone has been hard at it arranging a galaxy of so many Stars of Magic to come and perform and lecture at Eastbourne in September. Here are four of those Stars who for the very first time appear at a British Ring Convention. So we are pleased to welcome, from the United States, Michael Weber, Jon Armstrong, Jason Byrne and Oscar Munoz.

Michael Weber is just a phenomenal magician and one of the most sought after talents on the corporate circuit across the USA. He is a terrific lecturer, close-up and stage performer. For more than two decades Michael has been creating and performing his own remarkable style of entertainment and has demonstrated his amazing talents throughout the United States, Western Europe, South America and the Far East.

What must it feel like to meet someone face to face who has the ability to determine your thoughts? Concentrate on a word, an idea, any number or image and Michael is able entertainingly to capture that thought with almost scientific precision. With style, wit, charm and absolute discretion, Michael utilizes these thoughts to create entertaining and mind shattering results.

He has performed for two U.S. Presidents. His style and originality has made him the personal performer for a host of celebrities like Arnold Schwartzeneger, Sharon Stone, Frank Sinatra, Steven Spielberg and Johnny Carson for their own private events.

Michael is the author of a book ‘Life Savers’. It is a collection of techniques and routines that can be performed with ordinary materials, ingredients to particular locations. These routines can be quickly improvised in a variety of location (the office, restaurants, bars or a friend’s home).

It is a real coup for us to be able to get Michael Weber to Eastbourne.

Jon Armstrong grew up in Orlando Florida becoming fascinated by the magic he saw in the theme parks around him and dreamt of having his own show. His dream came true when Disney asked him to bring his act to Epcot where he became the resident magician at Walt Disney World. He was just 20. After spending 5 years there, Las Vegas called and found Jon on a semi-regular basis inside the Secret Pagoda at Caesar’s Magical Empire. He is also a frequent performer at the famous Magic Castle and was named Close-up Magician of the Year by The Academy of Magical Arts in 2007.

Using an amazing blend of dynamic personality and imaginative presentation, he brings wonder to all who experience him. By combining card magic, humour and audience participation Jon will keep you laughing and well entertained and making the unexpected happen.

The magicians who have seen Jon Armstrong perform on his two visits to this country confirm his work is awe-inspiring as they watched in disbelief. You too will be awe struck when Jon performs for you.

Jason Byrne (magazine photo above) was born in Fribourg Switzerland but has spent most of his life in the USA. From the age of 6, when he first became fascinated with magic, Jason was destined to become a world-class performer.

Jason started his show business career by becoming a regular performer at local Dinner Theatres, Wizardz – The Comedy and Magic Club and the Magic Castle. His style and approach impressed a producer Gary Ouellette that led him to perform on NBC’s ‘Worlds Greatest Magic’ to be followed by Fox’s ‘Magic on the Edge’.

Jason has earned several major distinctions including the Golden Lions Head Award presented by those magical legends Siegfried and Roy. Then for two years in succession he was voted Stage Magician of the Year by The Academy of Magical Arts.

Around the world Jason has performed at the Lido in Paris, the Wintergarten in Berlin and the Shinagawa Prince Hotel in Tokyo. He is no stranger to Las Vegas having appeared in such Revue Shows as ‘Splash’ at the Riviera and ‘Folies Bergeres’ at the Tropicana. He is currently performing twice nightly at ‘V’- The Ultimate Variety Show at the Venetian and Planet Hollywood.

We await with great excitement the chance of seeing his ‘Post Modern’ magic act in the main Gala Show, when he will be joined by other top class acts. Not only is Eastbourne Jason Byrne’s debut at a British Ring Convention, it is his first UK appearance.

Oscar Munoz is an award illusionist and humorist with a powerful message in his act. Throughout the United States, Mexico and the Far East he has presented his brand of comedy magic to the delight of adults and children of all ages.

Renowned as a motivational speaker with over 15 years experience Oscar uses his brand of magic as a vehicle to transport his audience to a world of wonderment and empowerment. In his home state of Texas he is known as a leading specialist in the field of motivational presentations. He was the hit of last year’s Abbott’s Convention.

Be prepared for something different when Oscar Munoz lectures and performs.

So here you have brief bio graphs of just four of the 34 headliners who will be making Eastbourne 2008 the finest Convention the British Ring has ever presented. It is no idle boast of ours that we don’t believe that there is another Convention in the world that compares with the line-up we are assembling and value for money for what we are offering. So if you haven’t made a registration, DO IT NOW! Our Registration Officer Neville Johnson is waiting to receive your application. Get in touch with him immediately by telephone on 01202 873234 or by e.mail: nevillejohnson25@aol.com or of course you can always use the Payments Page on this website. www.britishring.org.uk