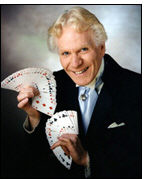 Norm Nielsen is now added to the already long list of magical stars who will be performing at Eastbourne. Our Executive Producer Paul Stone has enticed Norm out of retirement to make a final appearance at a British Ring Convention. How many of you can remember the last time he was with us? It was back in 1994 when he spectacularly closed the first half of the Saturday Show. 14 years on, he’s back again.

Norm was born in Kenoshe Wisconsin his interest in magic starting at a young age after watching his barber perform a few cigarette tricks. At his first magical Convention he saw someone who inspired him to go to Los Angeles and apply for enrolment into the Chavez School of magic from where he graduated in 1953. And who was his inspiration? None other than Neil Foster.

He was advised by an agent in Hollywood to ‘develop something of your own’ in order to be a success in magic. To Norm it was the best advice he was to receive. One of his first ideas was to make a trumpet toot as it floated in the air. He eventually rejected this idea but it led to the creation of the floating violin. Several prototypes were made and in two years it was ready. It took several more years to perfect the illusion to its current state to become Norm Nielsen’s trademark.

Norm’s act has been one of the most sought after variety acts in Europe. He has worked almost every top nightclub in the world including the Crazy Horse Saloon in Paris where he performed on and off for six years.

There must be many of you reading this that have never had the opportunity of seeing Norm Nielsen performing live and perhaps even more of you who will want the opportunity to see him again. It is considered by many to be one of the most memorable magic acts of the past five decades. So don’t miss this opportunity by not being in the audience at Eastbourne!

This year Claudius Specht of Switzerland will be thrilling us with his Tempo Juggling Act. While his classmates were playing football, Claudius at the age of 8 was practising with clubs at the well-known Swiss Youth Circus Basilisk. Whereas most of us magic nuts were hooked on the magic bug at an early age Claudius became ‘infected with the juggling virus’. After graduating he was engaged by Circus Flic-Flac for the 1994/95 season. After that he turned his hobby into his profession.

Claudius concentrates only on two types of props: clubs and cups. Impressively and quickly he swirls up to seven clubs in the air and he is the only juggler that throws ten cups in the air and is able to catch them all again.

Claudius Specht is the latest in a long list of the world’s greatest jugglers including Bert Garden, Sabrina Fackelli and Gena Kil, Wally Eastwood and last year Daniel Hochsteiner who have thrilled us with their skill and dexterity in past Conventions.

In the convention News of 11th April we told you of an innovation we are introducing to the convention this year, the Micro Magic Marathon. Ali Bongo who is organising the event confirms it’s going to happen on the Thursday evening in the Floral Hall starting at 7 p.m. and going on until everybody moves into the theatre for the evening show. All registrants for the convention will be supplied with a card to make notes on and record the number of the performer they like the best. The cards will be collected as the audience goes into the theatre for the show. All prospective participants will be given numbered badges with their programmes at the registration desk. If you intend to compete please make sure to ask for your badge. These will slip into your regular badge-holder so the spectators will be able to see for whom they are voting.

Remember the more groups you entertain, the more chances you have of getting your number on their card. It isn’t above the realms of possibility if some of the participants move into the theatre bars to find people they have not yet entertained. Ali advises that it’s best to do a short sharp show avoiding standard items that are likely to be used by others.

In order that the event can be set up probably in advance, Ali requests that all those members who think they would like to take part in this Marathon would they please contact him by phone (020 8673 3066) or by email: Alibongomagician@aol.com

So come on all you table hoppers and impromptu magicians prepare a snappy and entertaining routine and join in this 1st Marathon. This is going to be an opportunity for some serious close quarter magic and hilarity for both audience and performers.

Many have already registered for this stupendous Convention from not only this country but around the world. Many are thinking about doing so. Think no longer and do it now by contacting Neville Johnson on 01202 873234 or emailing him at nevillejohnson25@aol.com. Or of course there is always the payments page on this website and PayPal. The President and Officers of the British Ring look forward to meeting and greeting you at Eastbourne. www.britishring.org.uk