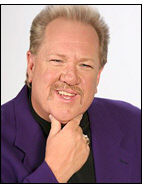 Michael Finney is rated by his peers as one of the Funniest Magic Acts in the business. Many of you will know him after seeing him perform in N.B.C.’s TV Spectaculars “World’s Greatest Magic” and “World’s Wildest Magic”. When interviewed by Steve Allen for Magic Magazine Michael was asked if he considered himself a magician doing comedy or a comic doing magic. Michael’s reply was emphatic. He was a magician doing comedy magic at the same time agreeing he was lucky enough to have written stand-up comedy to go with it. He insisted he wanted to be a magician but even more so he wanted to be an entertainer. Comedy magic was his tool to entertain.

He went on to reveal he didn’t start doing magic until he was 24 years old and had no prior knowledge of the art. In his early development he wasn’t influenced by anyone but he had a great admiration of Larry Wilson and Ricky Jay because they were able to entertain while doing magic on talk shows. His magical career started as a magic bartender at Phoenix’s Golden Eagle Restaurant followed by three years as ‘house magician’ at the Legend City Amusement Park. When the park closed it became his mission to get into the comedy clubs doing comedy magic. So he went to Los Angeles and sought out every club. It was the right move and it paid off.

When further asked what criteria he used to evaluate what tricks would work for him Michael considered that to get laughs it is not right to be mean a good trick. Magic is magic and that’s what the audience has come to see.

His advice to anyone who aspires to be a comedy magician is to view their act like film – it takes time to develop. Everybody is funny or can be funny once in a while. It takes practice to be funny all the time. Don’t be afraid. Fear is excitement when entertaining.

Michael Finney will not only be appearing on stage but will be giving a lecture. So if your forte is doing comedy magic or if you are aspiring to do so you will learn a lot from a grand master of this form of entertainment.

Mark Kalin & Jinger are an award-winning American magic couple known for large-scale stage shows and for appearances in network television specials. Currently they are appearing at the Magic Underground Theatre in Reno Nevada. The show opened in 2004 and was regarded as a bold experiment in the art – one of only several venues in the world devoted to magic and illusion. The Magic Underground Theatre was carefully designed to show many astonishing examples of magic – including sleight of hand that can be appreciated by audience sitting close to the action. Since opening, the Magic Underground Theatre has established itself in Reno as a unique evening of theatre and a special collection of wonders. Sadly it is not possible to bring the whole show to the stage of the Congress Theatre in Eastbourne. But be assured the act they will be performing will include a selection of their scintillating illusions.

As a boy, Mark wanted to be a puppeteer until he found a book on magic. He tried to do a few tricks and found it was something he could master. In particular he was hooked on a sleight-of-hand trick with a billiard ball that endlessly fascinated him. It still does. At twelve Mark was performing at birthday parties. Ten years later he was recognized as a top magician with his innovative routines. It was then he met a performer Jinger Leigh. Jigger started dancing aged four and at fifteen she was working as a professional dancer touring with artistes like The Beach Boys, Tony Bennett and Cab Callaway. At a resort in Guam she met Mark and was instantly impressed by his magic and his rapport with the audience. As they began working together, Jinger became an integral part of the show.

“I saw learning magic as a real challenge” Jinger recalls. “Magicians think about things differently than dancers – it’s just a completely different focus. But I also knew that magic and dance could be combined to make the right blend for me. Working with Mark made a dramatic difference, and changed both our lives, on and offstage”.

“From the start, I realised that those standard ‘magician and assistant’ roles did not fit in” Mark explains. “We had to find a special combination that made the most of our performances and created our own sort of magic.”

Working together rapidly drew attention to Mark’s skilful magic and his personal approach and Jinger’s elegance and theatricality. They became known for their fast dramatic performance and quickly their magic was in demand around the world. In 1998 the prestigious Academy of Magic Arts – Hollywood’s Magic Castle, voted as Magicians of the Year, Kalin & Jinger.

Writing on their performance given at the Magic Castle’s Palace of Mystery, a difficult room for any Illusionist to work, Quinlan’s Inside Magic Review for the Magic News Network awarded them Five out of Five – their highest! In his report he wrote “Kalin & Jinger performed the finest show he had ever seen. Their dedication, enthusiasm, choice of magical effects and unique charisma were just some of the reasons for making such an unequivocal statement”. And his advice? “Do not miss Kalin & Jinger – in fact affirmatively seek out their next live performance. Life is so uncertain and there is no sense putting off such a wonderful experience”.

You don’t have to seek out Kalin & Jinger’s next U.K. appearance. It will be at the British Ring Convention in Eastbourne in September. Take Quinlan’s advice and be there to see them!

At last year’s Royal Variety Show Raymond Crowe made a highly successful appearance as he did in February in the David Letterman Show at Caesars Palace Las Vegas. This year he makes his debut at a British Ring Convention. He is described as one of Australia’s leading contemporary magicians and Australia’s only Unusualist. His innovative fresh approach delights audiences both intimate and grand. With his warm sense of humour, modern approach and highly skilled traditional techniques Raymond invites his audience to impart on a journey that transcends belief.

Raymond’s self-inflicted magic is sprinkled with witty, charming comedy, fun audience interaction-participation and sleight-of-hand manoeuvres that have to be seen not to be believed. The act is a collage of his most sought after sketches that have amazed audiences throughout the world. His incomparable brand of entertainment includes a fine understanding of the art of ventriloquism, which when tempered with Ray’s gentle good nature let the ‘volunteers’ become the stars of the show.

Norman Pace of Hale & Pace says of Raymond “You are a fantastic performer bound for stardom. Gareth and I have worked with many acts over the years in the UK and Australia. You are one of the most innovative, creative and professional of all of them”.

There is no doubt Raymond Crowe will be bringing an entirely fresh form of entertainment to this year’s Convention.

Have YOU yet to make that registration that will enable you to see this galaxy of the greats of magic at a single Convention? E.mail our Registration Officer with Neville Johnson at nevillejohnson25@aol.com or register on line by going to the Payments Page on this website and use PayPal. If you would like a brochure and application form e.mail our PRO Bob Hayden at bobring25@aol.com and he will send you one. www.britishring.org.uk