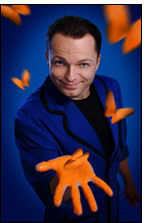 Timo Marc is a young magician hailing from Stuttgart who has quickly made an impression on the magic scene. For a number of years he worked in banking but like many others who follow their initial choice of a career find their ultimate ambitions are not being fulfilled. At school Timo together with a group of his classmates had received a basic training in magic from a teacher who had a passion for the art. This group bonded, exchanged ideas, organised evenings of stage and table magic allowing Timo to realise where his preferences and strengths lay. With the knowledge he had acquired at school and becoming a member of the Stuttgart Circle Timo decided to alter course and dreamt of earning his living as a magician. Already evolving in his mind was an idea for an act. With the assistance of two friends from the Stuttgart Circle his idea became a reality. Following several performances of the act he received from members of the Circle a mass of feedback enabling him not only to advance it but bring it to perfection. In 2005 he entered the 11th German Championships of the Magic Arts organised by the Magic Circle of Germany where with the’ Magic Shadow Play’ he had created, he took first place in the category of General Magic with Music.

This success convinced Timo it was now time to have the courage to become a professional magician. But he was wise enough to realise that success in a competition would not mean that bookings would roll in. He knew his act had to be attractive to organisers, be the right length for different show formats, be made transportable and lightweight and most of all he needed to gain experience. He continued to enter competitions and at the Foire des Magiciens in Esch Luxemburg in 2006 not only was he awarded the Grand Prix Prize by the Judges but received the Audience Award as well. Quite impressive for a new boy on the block! More success followed in October of that year when at the 21st Magic Grand Prix in Monte Carlo a festival of Magic Stars from the five chosen finalists the winner and awarded The Golden Wand was Timo Marc. More awards came in 2007 and in April 2008 at the World Magic Seminar in Las Vegas held under the auspices of Siegfried and Roy, Timo won the prestigious SARMOTI Award for being the most creative and entertaining magician. What a record in two years!

So what it is about this act that has made Timo the German Champion of ‘General Magic with Music’ (he retained that title at 12th Championships of the Magical Arts at Neuss near Dusseldorf and became the overall winner, his ‘Blue Vision’ act being judged as the magic of the new century) Technically ‘Blue Vision’ is a combination of magic, television and painting. Timo ‘paints’ images on a blue TV Monitor and then pulls actual objects off the screen and lets them fly off by themselves. But it is the stage character that he creates and describes as being breezily, laid back and easy that makes him someone you want to see again and again. Don’t miss him at Southport.

Last year at both the South Tyneside Convention and the Bristol Day of Magic Brando & Silvana performed their Gambler and Flower Seller act for which they received excellent reviews. This couple from Argentina but now living in Barcelona will be bringing the act to Southport and giving a lecture on theatrical magic.

A lot of creative thought has gone into construction of the act which although having a strong theatrical dressing does not however allow the magic to be lost. Likewise neither does the skilful juggling it has or what might be considered by some for it to have a pantomime approach. It is an act full of contrast with an explosive and unexpected climax. It is an act that will surprise you.

Both Brando and Silvana have a strong stage presence but it is the lively personality of Silvana that comes across to the audience. She has a great enthusiasm for both her magic and juggling. Like so many of today‘s double magic acts she is much more than an assistant; she is an equal partner being an exceptionally good magician in her own right.

They will also be delivering a lecture on Theatrical Magic that embraces dramatic structure, motivation, logical justification for the magic, personage and the use of different techniques that can enhance the magic. It is a lecture on an aspect of our art that is rarely available let alone given and is one, if you wish to heighten your persona, at which you need to be present.

These are just two of the headline acts who will be at Southport. Registrations for the Convention are now being accepted. You can make that registration today by going to the payments page on this website and using Pay Pal or getting in touch with our Registration Officer Neville Johnson by telephone on 01202 873234 or by email at nevillejohnson25@aol.com.