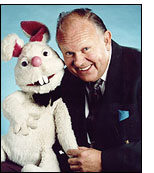 This year, particularly, for the Children’s Entertainer there will be not one but two specialist lectures and who better to deliver them than Terry Herbert and John Kimmons.

Terry Herbert (photo) is acknowledged worldwide as the Crowned Prince of Children’s Entertainers with a lifelong experience for doing so. It started in 1956 when he applied to and was appointed by the Butlins Organisation as a Redcoat Children’s Entertainer at their Cliftonville Hotels. This gave him the great opportunity of finely honing his already considerable magical skills and to engage with a young audience on a daily basis. It was a venture that proved to be invaluable. He was to stay with Butlins for the next nine years working his way up the ranks to be Resident Compere and finally Entertainments Manager. During the latter period one of the Redcoats working under him was as then an unknown but up and coming comic Jimmy Tarbuck. Following his marriage to Averil in 1965 (she was his Redcoat Secretary) he left the organisation to become the assistant and promotions manager at the Streatham Ice Rink in South London. It was there he presented Howard Peters, his enduring friend, escaping from a block of ice in the middle of the rink.

Another change in career was to take Terry into the toy business where he remained for the next 12 years combining it with working as a semi-pro magician until deciding to become a full time professional. It was a wise decision to do so and one that Terry has never regretted.

Over the next three decades plus Terry established himself not only as the countries foremost Children’s Entertainer but an International Comedy Magician gaining a host of prestigious awards along the way including the British Ring Comedy Cup in 1980, the British Champion of Comedy in 1986, The Magic Circle ‘Carlton’ award for Comedy magic in 1992, and the David Berglas award of the British Magical Society in 2008. On television he has been a guest artiste on numerous light entertainment shows and made over 50 programmes that were screened on the Children’s Channel on Cable and Satellite Television plus a series of children’s programmes on Thames Television called Five Magic Minutes. He has produced a number of very successful instructional Videos/DVDs. His video Children’s Magic – the Herbert Way was a runaway best seller and became a standard work of reference for the newcomer to entertaining children as well as for experienced performers.

His latest DVDs Magic for Under 5’s and The ‘Kidabra’ Kidshow Superstars Volume 1 are also best sellers. In the former you see a live show with some of the tricks Terry regularly uses and those most all important ‘bits of business’ which children loved. Next he explains the tricks and what effect he is trying to achieve. This and more will be the basis of the lecture Terry is delivering in Southport and so that you can bear witness to the impact that his work has on a young audience he is arranging for such a group to be present.

John Kimmons is a Magical Ventriloquist. As Kimmo he has been performing professionally for over 25 years delighting audiences with his unique blend of magic, comedy and ventriloquism. At the Blackpool Convention in 2008 he was awarded the title Children’s Entertainer World Champion and became the first ever children’s entertainer to pick up the highly respected Ken Dodd award for Comedy.

A large number of you will remember John from the days when he could always be found behind the stand of Supreme Magic. How he came to be there happened in rather an unlikely way. The first magical Convention he attended was at Blackpool when he was aged 15, and where like many others he was immediately drawn to the Supreme stand. He was already in procession of the Supreme catalogue, a catalogue he had studied with meticulous care and intimately knew every effect it contained. As usual there was a large crowd surrounding the stand, such was the magnetism and pulling power of Supreme Magic’s proprietor Edwin Hooper. However Edwin when demonstrating his vast range of effects was not giving the cost of any individual item. So without reference to the catalogue John, from the front of the stand, informed the crowd of each effects price. Edwin was stunned by this young man’s daring interruptions but instead of rebuking him, invited him to come behind the stand and assist. Thereafter John was to accompany the Supreme and later the Edwin’s Magical Arts team to all major Conventions and he was to become a most popular member with the customers. Coincidentally John had performed his first children’s show at the same age and has since gone on to work at almost every conceivable type of venue from parties in private houses to large theatres and large festival audiences.

John firmly believes that the contents of any children’s show should be aimed at a family audience rather than being just merely a distraction to keep the children occupied. He keeps his shows devoid of repetitive filler material instead packing them with stunning magic and hilarious ventriloquism routines. So in his lecture ‘Talk to my Hand’ he will not only be stressing the importance of performing visual magic but emphasising the attention that must be given to ensure it is entertaining. He will also be exploring and showing how the use of ventriloquism with hand held animal figures can add to and enhance your children’s show as well as detailing the skills required to master this art form. It is one that is increasingly becoming popular as an alternative to ballooning modelling and one you may well want to adopt.

If you are a children’s entertainer these are two lectures you cannot afford to miss. In all, spread over the period of the Convention, there will be eleven lectures/workshops. These lectures alone make the registration fee of £125 per person (£100 for British Ring members and their partners), excellent value for money. For Juniors of 18 years of age or under there is a reduced registration fee of £65. So why not make your Registration now and enjoy four packed days of magic and be in the company of and mingle with many of the world’s Stars of Magic.