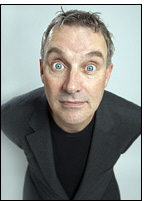 It has just been confirmed that John Lenahan is joining the long list of headline magical performers at this year’s British Ring convention in Southport. John came to Britain in 1984 from his native Philadelphia for a short trip and has never quite made it back. From an inauspicious beginning (it was a summer season with Little & Large) John has become a successful corporate entertainer. He grabbed the headlines in1994 when he was the first person in 85 years to be expelled from The Magic Circle. This came about following an appearance on the BBC 1 Show ‘How Do They Do That?’ during which he explained a sleight of hand known as the Three Card Monte. He considered it to be, as did many others, more of a gambling con than a trick. John did not appeal against the decision, took the rap and enjoyed the publicity. His subsequent TV appearance in his own 1997 series for BBC 2 ‘Stuff the White Rabbit’ drew rapturous praise from the press. This series achieved record ratings for the slot and was responsible for influencing a number of youngsters to become magicians.


2004 saw him starring in a primetime BBC 1 Show ‘Secrets of Magic’. Aside from magic other TV credits include presenting a travelogue factual series on BBC 2 called ‘The Open Road’ which featured John travelling across the UK finding out about the lives and traditions of the British people. He has played the voice of the Talkie Toaster in the first series of Red Dwarf and made guest appearances on everything from TFI Friday to Celebrity Squares and has regularly compered and topped the bill at London’s Comedy Store. He has also fronted Hoax Busters an ITV network show lifting the lid on scams and hoaxes. He has guested on numerous chat shows with Terry Wogan, Gloria Hunniford, Jonathon Ross, Danny Baker and most recently Jack Docherty.

John has performed all over the world from Beijing and Hong Kong to Dubai and Dublin and has toured alongside such luminaries as Jack Dee, Victoria Wood, Lenny Henry and Michael Ball.

Besides all this, John is one of the most successful corporate entertainers and presenters in the country. Apart from his regular show stealing cabaret he has linked numerous conferences, made kitchens appear for Neff, taught Bank of England staff to juggle, read thousands of minds and levitate a 20 pound Toblerone bar. He was the first person on record to perform magic live over the Internet for BT.

He has the rare talent of making any audience laugh at a magic act, young or old, north or south, televised or live, alternative or mainstream. He was described in The Guardian as ‘The mascot of magical renaissance’ and by Jackie Collins as ‘extremely good looking’

John Lenahan lives in Cricklewood North London with his son and a collection of computers and gadgetry. In a world dominated with awards he is proud to have once been voted Time Out’s ‘Street Magician of the Year’. John’s first novel ‘Shadowmagic’ was published last year. ‘Shadowmagic’ is a rip roaring fun fantasy adventure novel very loosely based on Irish mythology where every chapter ends on the edge of a cliff (or at least on a high curb). In it you are invited to join Conor as he grapples with typical problems like how to deal with a father’s high expectations, how to survive in the world on your own and how to woo a girl – that wants you dead. ‘Shadowmagic’ is a podcast for young adults from 12 to 112. It has been widely recommended.

You will have noticed that among the photographs in the brochure is that of Aonghus McAnally. Unless you have attended magical Conventions in Ireland or can receive Irish RTE Television or listen to RTE Radio the chances are you that you may not know of Aonghus. He is one of Ireland’s best known faces and voices in entertainment. So how did this TV and Radio Presenter become involved with magic? It was during his early television career as presenter of ‘Anything Goes’, a Saturday morning children’s show when he performed the Houdini Sub Trunk live. He describes it as the scariest thing he has ever done on live television but through this introduction, his love of magic began.

What will Aonghus be doing at Southport? He’s hosting the headline International Magic Show on Saturday night. Aonghus will not only be a fresh face but will be bringing a fresh approach to this most important responsibility. His experience in hosting everything from variety shows to quizzes to debates makes him the ideal person to follow in the footsteps of Jeff Hobson, Rich Bloch and Ali Bongo. He has toured Ireland with his own show ‘A Song and a Laugh’ and is always in great demand for his after dinner comedy act.

What is the background of Aonghus McAnnaly? He grew up in a family that was steeped in a tradition of theatre, film and television. He is the son of the late Ray McAnnaly a film and theatre actor and a Bafta winner. He is remembered for playing the part of the father in ‘My Left Foot’ starring also in ‘Force Protocol’, ‘The Mission’, ‘A Very British Coup’, We’re No Angles’ and ‘Cal’. His mother Ronnie Masterson was also an actress one of her roles being the Granny in ‘Angela’s Ashes’. His parents allowed him to decide what he wanted to be. As a child he had the ambition of being a truck driver at Dublin Airport an ambition that changed when he discovered music. Then all he wanted to be was in a rock band so don’t be surprised if we have a brief musical interlude among his unique blend of blarney humour and chat as he introduces the terrific line-up of David & Dania, Nechporenko, Hayashi, Timo Marc, Dania, and Sean Taylor.

These are just another two of the people you will be seeing at Southport. If you haven’t already registered for this great Convention do it now and get in touch with the Registration Officer Neville Johnson on 01202 873234, by E.mail: nevillejohnson25@aol.com or via this website. Do it today.