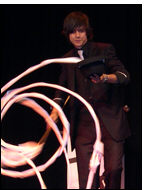 An additional event has been added to programme for the IBM British Ring Convention at Eastbourne. "The Cassadaga Propaganda" is a new show written by Ben Hart (photo) and Neil Kelso with their company "Kindred Phenomena Theatre". The period spanning 1840 to 1940 provides the inspiration for the show. Voices from the grave and spooky mediums and their stories are featured. It's a show about ghosts and spiritualism, which runs for seventy minutes with no interval. You can see it at midnight in the Jevington Room of the Convention Headquarters hotel, the Landsdowne, after the Saturday Gala. Seating is limited to 80 so this will be a ticketed event, with a charge £5 to cover the cost of the room hire. Tickets will be available from the registration desk from the Thursday morning of the Convention onwards. The British Ring is very pleased to be able to offer an early preview of this new show to Conventioneers.

Ben Hart, a winner of The Magic Circle Young Magician of the Year, and Neil Kelso are both members of the Winchester Magical Society a very active magical club in the South. The show has been devised for the general public but will be of special interest to magicians who are into mentalism or enjoy bizarre magic. It includes many mental effects not seen for some time. This is a theatrical show appropriate to the bewitching hour.

The guest speaker at the Ladies Afternoon is Beryl Maile who once again will be telling you ‘How to paint a picture while your buns are in the oven’. The talk Beryl gave four years ago was most fascinating as no doubt this year’s will be. The afternoon will start promptly at 2.00 pm in the Gold Room of the Winter Garden complex with tea being served at 2.15. Make sure your partner requests a ticket for you when making your registration.

We reported in the last convention news that hundreds of you had already registered. Since then over a further hundred of you have done so. But there is still room for you to join us. We are delighted over 20 magicians will be coming from Holland and several from France. If you will be registering by post please note the last day for posting it is Thursday the 16th September to enable the Registration Officer to acknowledge your application before he leaves for Eastbourne. After that date you can always register at the Registration Desk which will be situated in the foyer of the Congress theatre from 10.30am on Wednesday 22nd September.