A quick look at Showzam!

As seen by Geoffrey Newton 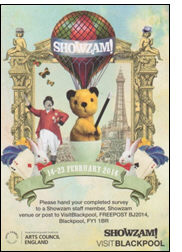 The annual show of Magic, Circus, Theatre and New Variety returned to Blackpool again in 2014 from 14th to 23rd February presenting a 10 day extravaganza of entertainment at various locations throughout the town.

I attended on Monday 17th February and on entering Showzam Central my first sighting was of ‘Melville and Catch’ presenting their Victorian Magic Shop. In here I saw Leslie Melville demonstrating card tricks to a number of very enthusiastic youngsters. Well it was half term and I am sure it made an interesting diversion from school.

In this area there was also a circus school where you were encouraged to try out plate spinning and diabalo. A gypsy fortune teller attended, the No Fit State Circus performed in the air and the Palace of Curiosities created interest.

My main reason for going was to watch The Underwater Bubble Show presented at the Tower Circus. Some of you may remember a speciality act in the name of Tom Noddy on the Paul Daniels Show in the 80’s doing things with bubbles. Well imagine this on a massive scale and a full two hour production too then you have it. It was complete with state of the art lasers, strobe lights LED spots with smoke jets and projected moving images, all set to very upbeat modern music, dance and of course magic. I saw the multiplying soap bubbles, bubble zombie, serpent silk with bubbles on, a black umbrella to one with coloured bubbles on it. A very different fast moving show the structure of which I had never seen anything like before. It had it all including a large (and I mean large!) inflatable shark which appeared and disappeared in the second half. If you see it billed anywhere do go and see this you will be truly amazed.

Showzam is a wonderful opportunity to see something different and goes from strength to strength year after year. It showcases new talent and publicises acts that are sometimes not often seen locally.