Alex Elmsley
One of the World's Greatest Legends of Magic and a true Gentleman.
An appreciation by John Derris 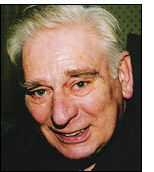 At this moment, wherever magicians are counting three cards as four, there is an enveloping sadness. The man who came up with a simple sleight that bore his name which is used by thousands every day is no longer with us. Alex Elmsley, acknowledged around the world as one of the greatest and most inventive brains in magic, died of cancer on 8th January, ironically the same date as his close friend Jack Avis who passed away two years ago.

I knew him for nearly sixty years, as a cravat wearing, Cambridge university student, rolled umbrella over his arm and a cigarette between his slender fingers. He used to join our Saturday group of magic aficionados always bursting with fresh, innovative thinking about our common passion. Later when doing his National Service in the army he would turn up in khaki uniform, forage cap and big, shiny boots but still with his inherent, sartorial style and a cigarette still between his fingers. Later he worked for the Patents Office and lived in Chelsea with his mother Joan and his brilliant inventiveness erupted upon the magic scene with a white hot intensity that quickly won him a world reputation amongst the magic elite. His output was prodigious. Cards, coins, cigarettes, billiard balls, penknives, rubber bands, thimbles, newspapers, cups and balls, ropes, business cards, every item in the magician's repertoire both on stage and close-up, all fell under his brilliant brain and took on new heights of wonder. He also had firm and profound thoughts on presentation, psychology and misdirection. The world was in awe.

He had a gentleman's upper class English accent (although he was born in Scotland) with a voice slightly reminiscent of Boris Karloff and bore a strong facial resemblance to the philosopher Bertrand Russell, a comparison that delighted him. In his retirement years he was occasionally seen at magic gatherings recognizable by his bushy eyebrows, check sports jacket, carpet slippers (far more comfortable he said) and a large glass of whisky in his hand. But always happy to talk with anyone, beginner or professional about magic, a trait that endeared him to everyone. I would often get calls from Americans visiting London asking if there was anyway they could privately meet this magic Brain of Britain, an appeal that was usually delivered with a solemn deference as if asking for an audience with the Pope. Alex was such a gentleman he nearly always acceded to such requests.

His writings, performances and originality were quite unique as proven when later his work filled two hard-backed volumes totaling nearly a thousand pages, painstakingly compiled and edited by Stephen Minch, two books which are now amongst the definitive works on magic. He devised new sleights and new plots that have achieved status as modern classics. Talk to any card aficionado and he will instantly recognize Elmsley gems Between your Palms, Point of Departure, Diamond cut Diamond, En Voyage, Brainweave, The Four Card Trick and many others that take their place alongside the card classics of yesteryear Everywhere and Nowhere, The Ladies Looking Glass and The Danbury Deviler.

In ten prodigious years between 1949 and 1959 over seventy original Elmsley tricks and sleights appeared in print; few magicians achieve that kind of output in a lifetime. His skill and fame attracted the greats from the USA and many names sought sessions with him Dai Vernon, Paul Le Paul, Slydini, Ed Marlo, Charlie Miller, Persi Diaconis and many others who often openly admitted to being fooled.

Born in St. Andrews, Scotland in 1929, the second son of a naval officer, he was introduced to magic as a young boy when he was given a set as a gift during a short stay in hospital. It was an introduction that turned into a lifelong passion of sleight of hand and manipulation. Then came Eton, National Service and Cambridge University where he graduated in mathematics and physics. Whilst at university he was a highly regarded and active member of The Pentacle Club both as secretary and as producer and performer in the university Theatre Club.

Science fiction and computer technology supplanted his interest in magic and he travelled the world for a leading British computer company although he kept some contact with close friends like Jack Avis, Peter Warlock and Francis Haxton. With constant travel and the need to look after his widowed and ageing mother in London, his magic took a back seat but was reawakened in 1991 with the publication of the first volume of The Collected Works of Alex Elmsley. The second volume followed three years later containing a further 110 original Elmsley sleights and tricks including his acknowledged card masterpiece The Dazzle Act.

Following the death of his mother he moved into a basement flat in Chelsea (affectionately named by his close friends as "Wuthering Depths") with occasional rises to the magic surface prompted by his friends of many years. A voracious reader he consumed detective novels, anything about Noel Coward and the theatre, wrote poetry, smoked far too many cigarettes and was given a jump start into magic from time to time by his friends. For the past five years he came to my house once a month along with Jack Avis, Lewis Jones, Tom Whitestone, Bernard Weller and Michael Symes when the conversation and banter brought about a visible change in him. The fire was still smoldering.

While Alex or Bonzo as he was known to his family never married he endeared himself to his brother Michael's family and various cousins with his loyal support, humorous stories and ditties and the occasional display of card and coin tricks. His brother, nephew Simon and nieces Alex and Nedda and grand nieces Corrin and Thea all had great affection for this humble, modest and kind man.

(Note for magicians: The Bonzo Count doesn't quite sound the same does it!)

He drank generous portions of the amber nectar of Scotland, largely to quell his lifetime torment of clinical depression which he referred to along with Winston Churchill as his "Black Dog"! But he was never offensive, never loud, English to the core with all the courtesies and elegance of his middle class, early last-century upbringing. He was a magic gentleman and it was my privilege to have enjoyed his friendship for over fifty years.

The lasting impression many will have of Alex was his appearance at The Magic Circle Centenary Celebrations last July when John Fisher induced him to perform some of his classic card effects and speak of his memories of the past. His Romans, Christians and Lions theme which cloaked his four ace routine was classic and showed his Peter Pan sense of fun that turned a staid card routine into entertainment.

Next time you perform the Elmsley Count, give silent thanks that you are a better magician because of Alex Elmsley.