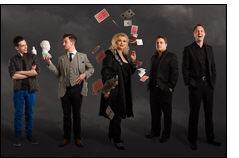 What have you got lined up for the audience in the autumn tour?

Edward Hilsum (EH) - I'm very excited about the new illusions and magical moments that we’re creating for the autumn tour. One of the great things about every Champions of Magic show is that there is something for everyone. I’m performing some new illusions in the show, one of which was inspired by the first magician I ever saw.

Alex McAleer (AM) - There are two parts to my section of the show. The first is an opportunity to have some fun with the audience by showing everyone why you should never play cards with a mind reader. I also play my own mind game, 'Guess What's Under the Hanky'.
I won't reveal too much about the second section as I'd like to keep it a surprise, but it's one of the hardest and largest scale stunts I've ever done.

Young & Strange (Y&S) - Our role within the show is to provide a spectacular finish to the evening. We will be performing stage illusions that are large in scale and performed with a genuine element of danger. The closing effect for the show is a brilliant bit of visual theatre.

What are the most spectacular parts of the show?

Y&S – We are fortunate enough to be working alongside one of the best theatrical special effects companies in the UK. In that respect, for a live theatre show there will be some genuinely spectacular moments. Combining that with the scale and impact that large scale illusions have, it should be an impressive and original show.

AM - It's difficult to choose as each of us have our own spectacular moments; from Young & Strange's grand illusions to Fay sat on the front of the stage doing a little trick that fills the entire theatre.

What does the future hold for magic?

Y&S – TV magic has seen a revival in recent years and has proven to be popular with audiences of all ages. Providing magicians are always looking to create new and original ideas (both on and off of the small screen) it should be an art form that continues to grow. Fingers crossed, otherwise it’s back to daytime television and charity food banks.

AM - I think live magic is the future, it's where it began and where it works best. We've all seen those guys on TV do the impossible, but that's just TV, on which the impossible happens all the time. But live on stage, before your very eyes, is where magic works best.

EH - Magic has never been more popular than it is today and with a show like Champions of Magic, audiences get to see the very latest illusions before their very eyes. I hope this show will inspire the next generation of magicians, just like I was inspired when I first saw magic performed live.

What led you to become a magician?

EH - I’ve always been fascinated with the art of the impossible. My parents bought me a toy magic set when I was eight years old, and it was fun, but the real turning point for me was seeing the incredible magician Lance Burton on television. He didn’t just do tricks, he used amazing skill to create magic! Meeting Lance in Las Vegas is one of the most magical moments of my life. Lance inspired me to become serious about magic and to produce my first doves when I was 15… the rest is history!

Y&S – We’ve both been interested in magic since childhood and had a passion for the art for many years. We started by performing close up magic and progressed to developing a stage act with larger illusions. A passion for daytime television and late nights, ensured it was the right career path to follow.

AM - When I was a child I used to say I wanted to be either a Magician or a shopkeeper – maybe I watched too much Mr Ben.

If you weren’t a magician, what job would you do?


EH - I really can’t imagine doing anything else. But I’m genuinely interested in other people. I got a degree in Psychology at university, so I’m sure that if I had to do something else, it would still be something creative that involving interacting with others.

Y&S - Young would be a Ginsters Pasty delivery driver, Strange would be a paperboy.

Who or what inspires your performances?

Y&S - Our performance has been developed from our friendship and off stage personalities, we love what we do and have a great time doing it. It is an honest and natural process of developing material because essentially we’re ourselves onstage but louder.

EH - I find inspiration in all sorts of things, like films, theatre and art. I’m always inspired by seeing a great performer, whether they are a magician or not. Magic has the power to connect with people on an emotional level. So any performance that makes me really feel something somehow inspires my own work.

AM - I’m a fan of the Vaudeville and Music Hall era of entertainment, which was a golden age for magic and variety on stage, so acts and performers from that time inspire me, adding my own contemporary twists.

What are your greatest achievements in your magic career?

EH - I felt privileged when I received The Magic Circle Youth Scholarship Award to develop my career in America, honoured to be chosen to perform at the London 2012 Olympics and it was amazing to perform in the ‘World Stars of Magic’ show in Vegas.

AM - Lecturing some of my own original material and ideas at the Magic Circle in 2013 felt quite special.

How long do you have to practice a new trick before you perform it to audiences?

YS - The time scale varies depending on the nature of the illusion, some take weeks and weeks to get right before performing in front of an audience.

EH - Anything from a few months to a few years... It’s the energy between me and the people watching the show that creates the magic though, so I can’t perfect anything without an audience.

AM - One of the problems with what I do, Mind Reading and Mentalism, is that you can only rehearse a routine on your own so much... You can theorise about how people will react and respond but you can’t know for certain until you’ve tried it one-hundred times with genuine living guinea pigs... I mean humans... I mean people.

What’s your favourite trick you perform?

EH - My latest idea is called ‘Silver’ and I love performing it. I decided that I wanted to give one person from the audience a completely magical moment that would remain with them. But I wanted to give them this gift without using big props or equipment. The result seems simple but took over two years to create.

Please tell us about your favourite performance in your career to date?

YS - We will never forget our first show in Edinburgh in August 2011. Having appeared to smash a spectator’s watch into several pieces, it was time for the big reveal. A reveal that involved the spectators watch reappearing inside 2 locked wooden boxes. Locked wooden boxes that required a key. A key that Strange had left in the apartment, 3 streets away…

What can audiences expect from Champions of Magic?

FP - An evening of enchantment.

EH - Magic is hugely popular today and there are several great TV magicians in the UK. But for many people, Champions Of Magic might be the first opportunity they have to see real magic performed live. I hope those people have the same experience that I had, seeing my first real magician when I was eight.

AM - A great line up of live magic. You’ve not really seen a magic show until you’ve seen it live, just on TV doesn’t count, and Champions of Magic has some of the best live performers in the country.

YS - A spectacular visual performance including vanishes, reappearances and dangerous illusions. We are privileged to be performing alongside the best magicians in the country, who are all performing different styles of magic. A true magical variety show which you will never forget.

Champions of Magic is on tour in Autumn 2014.