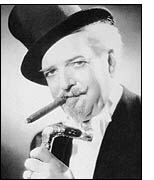 As if by Magic, the dream of providing Harry August Jansen (DANTE the Magician), and his wife Edna Herr Jansen, with a dignified final resting place has become a reality! On March 2nd and 3rd, 2004, the remaining financial costs of this project were covered by proceeds from the sale of donated magic tricks and memorabilia at the Oakland Magic Circle's Annual Auction in Oakland, CA., and on the following day, a generous financial contribution from the Fantastic Magic Company (Gary R. Frank).

Solicitation for the Dante Memorial Fund was begun in May of last year with a generous $200 donation from Nielsen Magic. What followed was a stream of contributions from well known personalities in the world of magic: DR. BOB ALBO, DAVID COPPERFIELD, CHANNING POLLOCK, TONY CLARK, MARSHALL BRODIEN, MARVYN ROY & CAROL, MOI-YO MILLER MONTES, and P.C. SORCAR, JR., among others. Over 75 donations were received from members of The Magic Collector's Association. Add to this number the International Brotherhood of Magician's individual "Ring" donations, large donations from the Mary Jansen Schreiber Family and the Society of American Magician's Endowment Fund, and those from magic clubs and enthusiasts, not to mention the proceeds from items auctioned on eBay, and you have over $14,000.00! Contributions for this project have been received from England, Australia and throughout the United States. To this end, special thanks and recognition should go to Gary Frank, Dale Lorzo, Walt Steinhart, and Byron Walker for donating auction items: the S.A.M. Endowment Fund for underwriting the costs of transferring Mr. and Mrs. Jansen's cremains from Los Angeles to San Francisco: ABB DICKSON for donating two engraved bronze urns, and GARY FRANK for underwriting the costs of engraving the marble frontispiece to the niche. The successful completion of this fund raising drive is due in large part to the generosity of the aforementioned donors.

Since my first exposure in 1949 to his 1940 Morosco theatre audience book, I have always felt Dante represented what a real magician should look like. It wasn't until I grew older, that I learned that looks aren't everything. Dante WAS a magician in every sense of the word! His acceptance by the public around the world garnered him a theatrical record unequalled even to this date, and the art of magic owes him a debt that can never be repaid.

Through the generosity of magic entusiasts everywhere, we have now rewritten magical history. No longer do the mortal remains of Mr. & Mrs. Harry Jansen languish in an aging cardboard box in the basement of the Chapel of the Pines In Los Angeles. Soon they will be housed in the breathtaking, elegant and historical surroundings of the San Francisco Columbarium where those wishing to pay their respects to this Master Magician are always welcome.