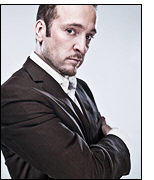 Derren Brown seems like a man possessed of mystical powers. But, he’s the first to point out that his illusions and stunts are simply a cocktail of magic, suggestion, psychology, misdirection and showmanship. Far from portraying himself as some sort of psychic, he is often at pains to explain the trickery behind his illusions.

His understanding of the tricks of the trade make Brown the ideal man to explore the claims of others who work in the field of the paranormal, and in his new series, Derren Brown Investigates, he does just that. With an open mind and an expert eye, he examines the work of three men whose work exists in the margins of science and reality. Here, Derren explains more…

Your new series, Derren Brown Investigates, is taking you in a new direction. Explain what the series is all about.
The background of it is that I come from a place where I have a fascination of the whole paranormal idea because I replicate it and immerse myself in it with what I do. But because I liked to take toys apart when I was little, I prefer to pull these things apart and find out how they work – particularly when the public could be potentially exploited or misled. My own work has taken me into an area where I have knowledge of how things can be faked. So I’m looking at three practitioners of the paranormal, and what they do. I’m not going in with any aggressive scepticism, but with a sense that I would love this to be true, and please show me the evidence that it is. I’m sceptical in the true sense of the word, as opposed to being cynical, where you’re just not going to listen to evidence. I’m going in with an open mind.

Each specific programme deals with a different subject. Tell us about each one.
There are three. There’s a psychic medium from Liverpool, a ghost hunter from Philadelphia who goes out and deals with hauntings and arranges exorcisms, and finally there’s a sort of human development course in Holland that uses psychic development as part of it. It claims to be able to help blind people see through the development of inner visions. So I went along with a blind lady from England to see what that was all about. In the first two I’m spending a week with each individual making the claims, and just being part of their world, and following them around and talking to them about it. The other one is slightly different, because it was more of a course that we were attending, and then I’m talking to the people who are giving the course, and the various characters around it.

Did you genuinely want to encounter stuff that you couldn’t explain?
Oh, completely. I think that’s what you want more than anything when you’re a magician. If you just set out to disprove then it’s just as blinkered and pointless as if you insist everything you see is true. You have to have a genuinely open mind. But extraordinary claims do need extraordinary evidence. That’s a very important axiom. If I say that the unicorn in the park is a real unicorn, and everyone else says it’s just a statue, my level of proof that I come up with to say it’s a real unicorn must be extraordinary. The burden of proof is on the person making the extraordinary claims. Someone just saying “Trust me” just isn’t enough. The problem is, when it’s something that you’re desperate for, when someone comes along and says, for example, I can communicate with your dead relative, you’re not really in a position to be balancing up the evidence. If you’re desperate, that’s the last thing you’re going to be thinking about when someone is saying they can give you what you want.

So, in the case of the medium, if he’s going round telling people what they want to hear, and he is bringing succour and comfort to them, is there a sense in which no-one is being hurt and you should just leave them to it?
I don’t want to give too much away about the documentaries, but yes, that was one of the things I really struggled with. Any form of comfort is comfort, and hope is hope, regardless of whether it’s false hope or false comfort. So it is tricky. Having said that, the other side of it is, if the practitioner knows that what they’re doing isn’t real, does that make a difference? Or do they themselves absolutely believe they’re doing it for real? Does their motivation matter? And maybe alot of people go along and feel comforted and maybe don’t take it that seriously afterwards. But equally there are a lot of people who get hooked on it and go week after week after week and spend more and more money. And the medium or psychic or whoever it is, is involving themselves in quite a profound and intimate level with that person

Is it possible that the practitioners actually believe what they’re doing themselves?
Yeah. As a sceptic you go in thinking “He’s either absolutely for real or he is a fake.” But there’s a middle ground, where he isn’t actually talking to the dead but he completely believes that he is. So the question of what ‘real’ means becomes a bit more blurred. Spending time with the medium and the people he was talking to, the concept of ‘real’ became a bit more subtle. You can’t climb into somebody’s head and know what they’re thinking. All you can do is test it, design a scientific test and see how well they do with it. That’s the only answer.

Considering they were going to come under a lot of scrutiny, why do you think the protagonists decided to take part in the series?
I suppose, ultimately, these guys decided to do it because of the publicity. The reality is that even if we did a show that completely exposed someone – which isn’t the point – but even if they took part in a show that did do that, they would still benefit from it. People get exposed all the time, and it doesn’t affect their careers at all. There are always people ready to believe.

At the end of each programme, you had to give them your take on what they do. Was that uncomfortable, or did you relish the opportunity?
Oh, I found it hugely uncomfortable. There are different outcomes to each of the three documentaries, but it is tricky if you’ve spent a week with somebody and you’ve got to know them, and got to know their family in some cases, it is difficult to then call them to account. It’s not about the one individual, it’s about the field that they stand for. But it’s nice to have that personal element to the documentary as well. But that meant it was uncomfortable. It varied how much I wanted to pick up the individual on what I’d seen. In one of the shows, I don’t do that. I don’t confront them at all at the end. With him it just felt like “It’s his world, this is how he finds his validity and his sense of self, and it didn’t seem appropriate for me to have a go at him. In the documentary I was able to talk about how all these things were working and coming about without the paranormal explanations, but it didn’t feel right at the end of it to have a go at that one individual.

Do you think that we should have legislation regarding things like people making money from acting as, say, a medium?
There is legislation, but I think the reality is it just doesn’t make a difference. At the end of any medium television show there’s a disclaimer saying it’s all entertainment. But they go by so quickly it almost doesn’t really matter. I couldn’t be any clearer in what I do that I’m not psychic, but the amount of people that still believe that I am is enormous. The emotional impact is always going to be stronger than the intellectual impact of a disclaimer. I think one thing that should happen is that churches should have to pay tax. It’s a huge reason for the way faith healers get away with what they do, and other bodies that are all about claiming church status, the status of religion, just as a way of not paying tax. I think that would help solve a lot of the problems.

Having done this series, did you enjoy it, and is it something you’d like to do more of?
I absolutely loved it and I would love to do more of it. We’ll have to wait until this one goes out and see what people make of it. I’m sure all the believers will accuse us of being biased, and using selective editing to make people look bad. In fact, it tends to be the opposite. So I’m sure people will say that, but for me it was very important to make these films absolutely balanced. I was genuinely hoping to see stuff that I couldn’t explain. But I loved doing this, and I’d love to do more along that vein, and if not, maybe something else that still inhabits that world.

Derren Brown Investigates is on Channel 4 on Mondays from 10th May at 10pm.