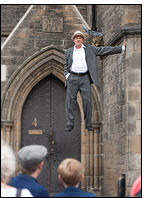 German performance artist Johan Lorbeer took the festival to new heights as he levitated on the Grassmarket during the opening weekend. Seen by more than 3000 people, Johan’s appearance trended on Twitter and created a huge buzz around the city.

For the third year in a row the Opening Night Gala at The Royal Lyceum Theatre sold out as magic fans were treated to eight very different performances of breath-taking illusion, sleight-of-hand, circus and mind reading. Award winning artists from South Korea, USA, Spain and France shared the stage with the UK’s finest magicians and American illusionists Penn and Teller told us why they believed The Great Tomsoni, Vegas illusionist Johnny Tomsoni, should win The Great Lafayette Award. Considered a virtuoso by the magic community, Johnny accepted the award via video link with his long term friend and student Lance Burton.

Performers enjoyed record ticket sales at this year’s new venue, Adam House Theatre and 140 pupils graduated from the sell-out Magic School at City Art Centre. Brand new show Tower of Illusion at Camera Obscura and The Secret Room at Lauriston Castle both sold out as members of the public tried their hand at solving riddles in a unique treasure hunt and watched Scotland’s finest magicians animate the Lauriston’s intriguing past with stories, performances and illusions.

The Edinburgh International Magic Festival announced a New Arts Sponsorship Grant to help develop a new partnership with Krispy Kreme - the first time the company has sponsored the arts. Gabriel Rudderman from France won the under 18 prestigious sleight of hand competition War of the Wizards and Englishman Paul Dawson won the Open War of Wizards Competition.

One of the unexpected winners at this year’s festival was social media as audiences and members of public tweeted, liked and shared their magical experiences, increasing MagicFest Facebook likes by 400% and Twitter followers by 50%.

MagicFest Artistic Director, Kevin McMahon said: "Thanks again to people from all around the world who travelled to this year's MagicFest. The festival grew by a massive 20% this year and I'm blown away by all the support from our sponsors, performers and audience who once again opened up to magic in their thousands. The shows at this years' festival received amazing reviews from the local media. Going forward I'm absolutely set on bringing the best acts from Scotland and around the world to enchant audiences here in Edinburgh."

MagicFest Managing Director Svetlana McMahon said: "This was our most ambitious festival yet, with more sell out shows than any other previous festival. We're really grateful to have once again been a recipient of the New Arts Sponsorship Award, from Arts & Business and the Scottish Government, supporting our partnership with iconic Krispy Kreme Doughnuts."