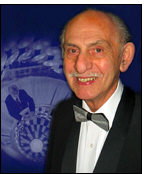 Two weeks ago I had the opportunity to visit Chicago. I not only was I enthralled by the beautiful and clean city itself but also with the wonderful people associated with magic that I had the pleasure of meeting. They included Eugene Berger who was to me a very gracious and extremely kind and patient man. Not only in his hands a trick became a miracle but also more important in my view a work of art. To have spent many hours with him and his delightful conversation was a treasure.

Robert Charles, Mike Burke and Benjamin Barnes who are the directors of Chicago Magic was the purpose of my visit where I was invited to give a forty minute stage performance. Eugene, Robert and Mike gave me several tours of the city and shared with me many meals in gourmet restaurants.

Accompanied by Eugene, Robert and Mike I visited the magic store and club of Tim Felix a very warm and generous man and then on to the store of the late Jay Marshall now operated by Sandy Marshall and his charming wife assisted by Pedro, a talented magician. It was in the theatre at the rear of the store that I was honoured to give a lecture to local magicians.

A highlight of my visit was arranged by Sandy Marshall to the Al Capone 'speakeasy' which has retained the original stables once own by the Chicago Mounted Constabulary and sold to Al Capone! It was dusk at the time of my visit to the 'speakeasy'. In the large open area , the moonlight partially obscured by the multitude of beautiful mulberry trees Sandy and Mrs Marshall arranged a barbeque for my visit to Chicago.

Everyone I met connected with the art and performance of magic were very kind to me and I feel now that I have made many new genuine friends. I shall ever be grateful to all those I have mentioned and the considerable pleasure they have added to my wonderful 'magic life'. If it had not been for John Fisher (the author of the great 'Cardini' book and many others) and Cesareo Pelaez of the Larcom and Cabot Theatres (Le Grand David) in Beverly MA encouraging me to accept the invitation I would have missed a most delightful and rewarding week.