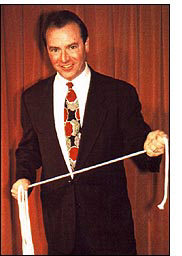 The 'World' of magic is in reality a quite small and - despite the continuing efforts of the 'MM' - closed community. News travels fast, ideas circulate at the speed of a click, and both can rapidly become stale. Wonderfully refreshing then, to encounter a magician of comprehensive, worldwide experience ranging over decades, steeped in the traditions surrounding our craft - who has some really fresh and insightful things to say.

Whit Haydn is a class act. He has worked everywhere from windy London streetcorners to Cunard staterooms, and absorbed pretty much all the knowhow going, in the process. From magicians, yes, but also from hustlers, shysters, scam merchants and conmen the world over. More than once a winner of the Magic Castle's Stage AND Closeup competitions, he has nothing that he needs to prove, in terms of professional accomplishments. On his own admission, the whole marketing side of the business leaves him somewhat cold, or otherwise we would probably have heard a lot more about him!

As our interview progressed, it became clear that he has provided ideas to more than a few well-known names along the way - not always 'officially'. Names who are sometimes generous with credit, but not cash - and sometimes not even that. Whit was generous with his time and information, as we chatted in the sun (yes - really) outside the Weston Winter Gardens, during a well-earned break between his various appearances at the Bristol DOM. We began by asking the peripatetic Mr H where he was 'from'...

"I live in LA now, but I'm originally from Tennessee. This accent (a kind of New York-ish generalised 'American' one) is an affectation, but my natural 'country boy' one was useful for 3-card monte, especially in New York!"

(Here he goes into a highly amusing vignette of the 'aw-shucks' Hick from the Sticks - taking the supposedly street smart Nooyawkers for everything they've got.)

"Back then, or even now, you couldn't just walk up to someone in New York and say 'Hey - you wanna see something?'! You'd get 'Yeah, I'll show ya something pal!' (use your imagination here). Or even 'do you want to see some magic?' People weren't interested. Back in the 60's especially, ESP was really big so I would go up to people in a bar and say I was doing an ESP Survey. That got them all involved right away - they thought I was a college student, and I would go into my Out of This World, and other ESP routines, finishing up by thanking them and asking if they could spare any change. I always got a good tip!"

In the 70's, Whit worked in London doing street magic, but found he was getting - arrested!

"The police would take me down to the local precinct house (that's - Copshop) and give me a talking to. They said 'It's an offence to the Queen'. I said - 'She hasn't even seen the show!'

It was none other than the legendary Ken Brooke who then stepped in, to explain to a young Whit how to avoid getting his collar felt:

"Ken really helped a lot. He told me that it wasn't legal to work unless you were a disabled veteran, so I needed to find one to team up with. I found this one man band from Ireland, Johnny Magoo, who worked in Earls Court, showed him some tricks and he said hey, you're pretty good. So he would do his music and draw a crowd, then tell them to stay and watch some magic from his 'son'!"

Whit went on to describe how he believes some street magicians stay working the streets for too long, and then don't really know how to adapt to work elsewhere, even if they are highly skilled performers. So the obvious next question was, how did HE make that transition..?

"I got a job in an amusement park. They had seen me work and I was booked to do a half hour show, twelve times a day, seven days a week! When I left, Lance Burton took over - doing his doves. That's where he really honed that act. He also brought in Mac King because the doves was only a 15 minute act and so Mac filled the other 15."

Even now though, Whit retains the mindset of the street performer: it was there he learned, in the front line, how to draw and keep a crowd.

"I want to kill as much time with one routine as possible. People are held spellbound but they are going to leave, the first chance they get. Even in a theater I am thinking, "The audience is just going to walk off". I've seen this kind of thing - "

He demonstrates a performer turning around during his applause after say, a card trick, to retrieve a glass for the next effect. Big mistake! The tyro turns back to find -

"They're gone! You should be taking out the glass while you're taking the applause, never breaking eye contact, going into "Ever seen a Tribble?"
(Yup, it's a real line he uses a lot. Well - have you?)

Another Masterclass Moment - with, no doubt, the brilliant psychological subtext of suggesting a refill, from your humble scribes. (Yes, it worked - <sigh>...). We continued with some discussion of :

"Vernon was the best thing that ever happened to magic. He wasn't really a great performer - he was a good performer, but more of an ideas man. When I saw him at the Magic Castle doing 3 card monte it changed an awful lot of my approach for me. He did it in this polite, gentlemanly way, not aggressive and cocky. He later told me that my idea for the linking rings routine was the first genuinely new comedy idea he'd seen in years, that I should write it up - it could be adapted to cards, ropes, anything. I never did it but I've seen the idea used by a lot of people."

(Whit's wonderful routine, featured later in the DOM evening show - and available on video - has a spectator supposedly copying him, and repeatedly uses the gag of looking away when all the impossible stuff is being done, then looking back once it's 'completed' by both of them - ie when he's got back to where the spectator started.)

"The Pendragons are my daughter's Godparents. Jonathan is a great friend, very intense about his art, and can't understand anyone who isn't. Their substitution trunk is the only one I enjoy. In their hands, Interlude becomes a man giving birth to a woman. They plumb the emotional depths of their illusions, in the way no-one else does."

"David Blaine reminds us how good the classics of magic are. As magicians we tend to shy away from stuff like the ashes on the arm, or rising card, because they're so familiar - but these are GREAT tricks. I make my living off the classics of magic: in my own stage act all I do is that stuff: the Sucker Egg, Cut and restored rope, Linking Rings."

"Tommy Cooper was a wonderful actor. Magicians don't understand what an actor is: they think it means a coarse actor and imitate that. A good actor playing the part of a magician would ask himself, 'What if when I were a kid, I found I really could do magic a bit, but nothing powerful or big. Then as I grew up I learnt some skills to create the illusion of more power, but I was proud of them anyway because of the skill? Then when I was doing magic as an adult, I would know that it was skill, but at the back of my mind also know I could always do real magic if I had to.' They need to ask themselves questions - why do you want to show this stuff?"

So - what are Whit's own 'mental models' as he performs?

"For close up, I use Bugs Bunny as a model. (!?!) He was the Great Manipulator. He hooked you and enjoyed manipulating you just for the fun of it. Elmer Fudd could have just walked away, but he never did. On stage, I am a Substitute Teacher, with an unruly class: I WANT to be put-upon. I'm trying to explain the magic to them but really I haven't got a clue."

"In the 90's I met Chef Anton, who is now my business partner. He is the American Trick Shot Pool champion, and he wanted me to instruct him in con games, asking him about the 3-shell game. I told him I had some pretty cool moves worked out when I used to do it back in the 70's. He asked me to show him but I'd really forgotten pretty much all of it. Then soon afterwards my copy of Bobo fell off the shelves at home and all these pages of drawings and arrows fell out: they were my old notes for the shellgame! I still couldn't remember, but he said let's get together and figure them out - so we did."

This all eventually gave birth to the School For Scoundrels, which the two of them have now been invited to run yearly at the Magic Castle. Acolytes get the inner sanctum lowdown on all those classic street scams. Which might sound to some like a sideroad, way off the Main Magical Motorway; but Whit couldn't disagree more:

"The real secret of con games, is that they are a better 'Model' for magicians than gamblers. A gambler wants to go unnoticed, so develops perfect, hidden moves. I think there can be too much emphasis on this - it doesn't HOOK the audience. John Ramsay used to flash a supposed load, show that he hadn't loaded anything - and THEN load it! It's the Slydini thing of suggesting a method, then taking it away. Great performers gets the audience enthused, they get them into it, get them to buy into a premise. The audience has to be assigned a role - they love that. They don't like to see blatant power. I see it like a rope, with you holding one end and the audience the other. Some magicians hold it too tight, pull all the time. You have to let the audience pull too, sometimes."

Finally, with all this veteran skulduggery at his command, perhaps it's no surprise that Whit Remains unimpressed by


We are also all the beneficiaries of this affection for the printed word: watch this (cyber)space for upcoming reviews of his recent publications: Street Magic, The Chicago Surprise, and School For Scoundrels 'Notes' (aka Encyclopaedias) on The 3-Card Monte and Fast & Loose. Incidentally, before Whit had to go and give his next performance, we were treated to an impromptu demonstration of the 'real' Monte. The moves were all scarily indetectable, but even more interesting was his elaboration of the highly organised mobs who pull this con. In the end it turns out to be much more about theatre and psychology than about flawless sleights. A bit like, um - Magic, really.