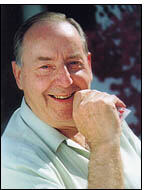 I have just lost my brother-in-law and one of the best friends I ever had. Jack Avis, one of the in-depth giants of magic as practiced by a consummate amateur, he was known to everyone who reveres close-up conjuring (his favourite word) in a smooth, classical, natural, unhurried style, devoid of flashiness and boastful presentation. In the manner of his idols, Dai Vernon and John Ramsay with whom he spent many hours in private sessions. Author of over four hundred items in magazines and books during the sixty years that he was devoted to the art that dominated his life, his influence on magic was far-reaching. He performed in public less than a dozen times but his knowledge and digital skill with cards and coins and other diminutive items, right up to the time of his death, were exceptional and admired right across the magic world. He was one of the best thinkers and originators in magic - he was the magician’s magician. A voracious reader (he read my copy of The Mind and Magic of David Berglas - 565 pages - in three days and could recall everything), with nearly every worthwhile book published in the last sixty years in his library and he was an avid note-taker and letter writer. He corresponded for thirty years with many of the greats including Ed Marlo who sadly he never got to meet.

I first met him as a teenager and whilst our respective magic skills and interests were quite different he was always friendly towards me. Eventually, once I had demonstrated my deference for magic, I was invited to his home and to family Christmas parties along with Al Koran, where he often presented an out-of-character magic show including tambourine rings, wonder box and Selbit’s blocks. It was at one of these family gatherings that he introduced me to his sister who I eventually married. (How could I ever thank him enough for that.)

His magic flourished and developed during his army service in Africa and Italy when he had access to unlimited packs of Bicycle cards and the latest magic books from the USA, unobtainable at that time by most UK-based magicians. A printer by profession it was his overflowing passion for magic that led to fruitful meetings with Al Koran, Alex Elmsley and Roy Walton, a group of close-up aficionados whose work and original thinking attracted worldwide attention and acclaim. At the same time he became a member of a distinguished group of noted magi of the day - Peter Warlock, Francis Haxton, Eric de la Mare, Louis Histed, Dr. Bernard Weller, Fred Robinson and Cy Endfield -from whose collective, fertile brains many classics of original magic emerged and were published in the magazine “Pentagram” In 1998 he was induced to release original material for a book “Vis a Vis” published by Richard Kaufman and just recently he co-authored a second book along with his friend Lewis Jones called “Ahead of the Pack”. Both are packed with original items in the distinctive Avis style and both received excellent reviews.

A quiet, totally honest, retiring man, shy by nature, quite devoid of ego and not one to push himself to the front of the crowd, he hated fuss and any adulation that might justifiably be directed his way. His respect for the history and practice of magic went deep and he demanded the same from others and he was passionate about exposure and the rape of secrets. Consequently he abhorred the current style of magic media presentation and the lack of respect of the art shown by professionals demonstrating greater interest in their bank balance. He had firm convictions about life as well as magic; I never saw him lose his temper but he possessed a verbal tenacity that would be used to support any personal cause in which he held a firm belief. He didn’t smoke, didn’t drink and was never one for fancy food or restaurants. He was a gentleman born of the quieter days of last century courtesy, manners and consideration for people and life.

About once a week I used to sit with him and talk about magic, politics, society, life, anything - he was a great conversationalist. His magic recall was quite incredible and he was always able to show me great ideas from the past and his nimble fingers still worked well at 82 years of age. If I discussed an effect that I was working on, he could invariably and generously come up with a simpler, far more effective way of doing the trick. On January 8th, a short time after we had all enjoyed one of the happiest family dinners ever celebrating my birthday, he collapsed on the stairs at his home, was rushed to hospital where he later died of a heart attack

He was the big brother I never had - God how I miss him.