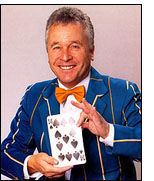 One of this country's top children entertainers, Jack Stephens, has sadly died at the far too early age of 62 after a short illness. Jack was one of those people born to entertain children. Naturally cheerful and exuberant himself, he passed that enthusiasm directly on to those he performed magic for.

Not limiting himself to magic, Jack's formal show comprised making balloon animals, puppets and singing and playing the guitar. He had a relaxed style, getting the children's attention through his personality and skills - not relying on loud music, raising his voice or resorting to questionable humour. Children adored him, both on and off stage, not just for his magic but also for his 'silly' jokes.

Jack was born in December, 1952 and came over to England from his native South Africa in 1980. He lived and worked for a travel company, for ten years in London; but when he and his wife in 1990 decided to move to Wiltshire, Jack took the opportunity to turn professional. In his career as a children's entertainer he worked in all arenas from libraries, school groups, weddings, cruise ships as well as private parties. So successful was his business, that he set up an agency to pass on work he could not do himself.

Jack enjoyed writing and contributed many articles and reviews to various publications - including MagicWeek. Looking at some of his back catalogue on this site - whether it be a magician he saw on a cruise ship, a television recording he attended or a review of a magic DVD - one is struck how positive and upbeat he is about what he has seen. He never saw it as his role to criticise his colleagues.

His top magic moment might well have been performing for the Queen with close-up magic at a private lunch party. However his reminiscences about a young boy picking up his magic wand, and tapping everything in the room to see what would happen to them, is surely a greater legacy to his skills. As Jack himself wrote: "I thought this a beautiful moment and so very magical." You can read this story and more about him in the Magic Profile he wrote in 2006.

However nothing sums up better Jack's love of children and entertaining with magic than the fact that he worked regularly for POD Children's Charity, which organises entertainment for children in hospital and hospices. The administrator calculated that Jack had performed magic for nearly 5,000 children in Bath, Bristol and Swindon. He truly believed in the therapeutic benefit of laughter and magic.

Jack leaves his wife Rosemary, who will continue to run his agency, and two children, Caroline and Susie - both of whom are expert balloon modellers in their own right.