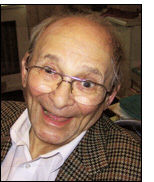 Jake or Philip Jacobs as it appeared on his birth certificate, was known by many for his performances as clown/magician or as that friendly, larger-than-life man behind Davenports counter. Sadly he passed away at Brinsworth House, home for retired members of the entertainment profession in December where he lived following the death of his wife Daphne. I knew Jake for over fifty years following his time as a comedian in Combined Services Entertainments during his war service after which he was a printer by day and an entertainer by night. His career as a performer blossomed and he secured many residences in hotels and restaurants for many years.

An excellent craftsman he produced many fine pieces of magic apparatus and was the first to make and introduce the nodding tortoise made from walnut shells which he purchased by the sackful, long before the mass produced plastic versions appeared.

Always with an eye to business he always sold on the walnuts to grateful bakers and confectioners! A great mimic, a wonderful story-teller and always full of show biz stories told in character. We will miss him.