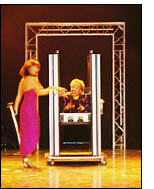 The Kamyleons "Lionel & Carole" are young French magicians. They won the first prize of General Magic at the congress of AFAP (French Association of Conjuring) in Nancy last November 2002. The act is based on Cartoons and his wife and partner Carole is playing a very significant role.

Lionel discovered Magic one day by chance, finding a Mickey magazine in a holidays center (special issue on magic) that opened his mind to magic. Eager to know more, he looked for other books dealing about all kind of magic. The virus had taken possession of him and since then it does not leave him any more.

Willing to go further on his shows, to make it better, to take care of all the small details to which one does not pay enough attention, but which does not escape to the audience, he decided to jump the step and to become professional. "This is not in the evening, back from work that you can start to imagine new acts and to work on them" he said, and "Today, I do not regret anything".

An act based on cartoons?

For a long time, Lionel is a fan of the Batman movie character "The joker". Three years ago, he thus decided to create an act called CARTOON inspired by this character. This very hesitant act at the beginning had many versions. To go even further, he decided to work in close collaboration with magician's friends, a theatrical adviser and a costumier. "I think that you can progress much more faster an do better job by calling upon qualified people in other artistic fields and to give to your act a professional look in all aspects. I absolutely wanted an act in which Carole was a true partner and not a beautiful girl just good enough to pass me the props. We used her capacities of actress for this role she filled marvelously."

Doing shows is one thing, but to compete at a contest is another one. This was to discover this exiting experience that they decided to register at the Magica Club contest of the Grand-Duchy of Luxembourg in May 2000. The first price was for them a real encouragement. To confirm this first price, they decided in 2002 to participate to the "Federation Luxembourgeoise de Magie" contest. They got the first price and the People's choice award. "It was for us the signal that we were ready to compete to the championship of France. Since then all shows we did were considered as rehearsal to polish every detail."

They are now preparing the FISM by doing as many shows as they can and also thinking of one or two new effects to add in the Cartoon act. The shows are taped to be discussed afterward with their consultants to correct and improve any detail.

Lionel likes magic acts that are elaborated; in which there is a true actor game and which are not just a succession of magic effects. A good example for him in France is Norbert Ferré, it would not be a surprise to anybody if he quotes David Copperfield, but also one we do not talk enough and we do not see enough in Europe: Nicolas Night.

"Of all visual arts, magic is very late regarding scenario. If among the readers there are some circus fans, they certainly noted the increasing importance of staging in circus acts during the last 10 years or more. This gave birth to wonderful shows like the -- Cirque du Soleil --. I think that in magic we have to go the same way. A magic act should not be a succession of tricks or technical performances but quite to the contrary the technique must be made forgotten, must be made completely invisible and help the artist to bring the audience through a magical voyage."

On top of that Lionel and Carole are very sympathetic, accessible and listen to all the people ready to deliver their opinion. We definitively have to consider seriously these new candidates at the FISM 2003 in The Hague but also in the magic world of tomorrow.