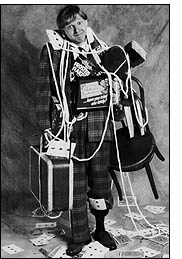 I could bore you with the journey, the hotel and the surroundings but I know all you want, really, really want is the magic so...

The main man, for me, was the one I rushed to see on my very first afternoon - Mac King (photo 1). He has just finished a long contract performing an afternoon show at Hurrahs casino which is in the middle of the Strip opposite The Mirage and Caesar's Palace. I was delighted to learn, during his performance, that his contract has been renewed for several more years to come.

His audience was a reasonable size for an afternoon event and I was amazed to discover that the opening for his show mirrored the opening of my children's show. If told that a cabaret was to start with the song 'If You're Happy and You Know It' you would not expect adults to take well to this. But Mac assured me, and I witnessed this, that everyone in the audience starts singing immediately and when he arrives on stage they are still belting out the word!

After a cut and restored rope routine, Mac brought a female spectator onto the stage to witness a performance of Card to Pocket which incorporated Card to trouser zipper. An enthusiastic thumb tie followed involving the same helper and a chair. A trick with an earthworm, Aerial Fishing and Cards Across were all given Mac's special brand of humour which changed standard effects into moments of madness and magical mayhem. Finally a borrowed banknote was burned and Mac removed various objects from his shoe before all was restored and his finale was reached in the form of a box illusion.

Mac himself was an extremely likeable person both on and off stage; he talked about finding methods for some of the tricks he used in spite of the lack of help from their creators and explained how this had been useful in broadening his own ideas. Let me say that you really shouldn't miss this show if you are in the city - and there is no need as being an afternoon event, it won't interfere with your evening plans.

Caesar's Magical Empire owes a lot to the set up at The Magic Castle in Hollywood. They offer two evening meal sittings which include close-up magic at your dinner table, a close up show and a stage show as well as the delights of the Empire itself. However, I discovered a little known ticket for less than half the price which was magic without the meal. I am told the food is excellent but as I was there early evening I just wasn't hungry!

There are two bars set around a central arena which has flaming torches surrounding it. This arena is used for a sound and light show during the course of the evening. However, both bars are worthy of a visit. At one, you will be entertained by a ten inch tall wizard whose name is Maximillian and has a voice which bears an uncanny resemblance to another Max! He performs various tricks which involve the help of whoever is sitting at the bar so you will probably find yourself talking to this video character at some time during your visit! The other bar contains a ghost pianist who will play requests and two chattering skeletons who have cockney voices and tell corny jokes or sing along with parodies of some of the tunes. 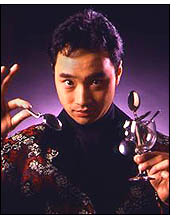 I was lucky enough to be allowed to visit the close up room twice and see two entertainers, both very good and very different from each other.

John Shyrock had a likeable personality and some endearing catch-phrases. The emphasis was on fun as he presented a four ace revelation which ended with coins appearing under the cards on the table. A matrix followed and a Coin Star led into some coin vanishes and appearances. A copper, silver, brass routine ended this section but an eleven card selection, each of which found in different ways, left the audience gasping. The four aces were then lost into the deck and spelled to before John finished his set with a solid cups and balls presentation.

Alain Nu (photo 2), in essence, performed three tricks - a silk vanish a named card effect and some spoon bending. His style was that of mystery but without overstating the fact. I normally find this type of presentation boring but Alain had me spellbound. He vanished a silk many many times whilst explaining various things about it. Each time, he was trying to prove he wasn't using a thumb tip. The whole routine was quite magical. The spoon-bending was also amazing, he certainly left his audience wanting more.

Joseph Gabriel was the stage performer and gave a good solid magic show lasting about twenty minutes. We were entertained with doves and an asrah which ended with a cockatoo which, when placed into a cage, became a girl. A rather nice effect was that of ten random words given by the audience being written onto a large board by a spectator; these then proved to be inside an envelope which had been on view. Some manipulation work followed and a card on rope effect before Joseph presented Tommy Wonder's signature trick. A couple of other routines rounded off a very nice show and probably furnished a suitable magical ending to anyone's night out on the town.

I am not going to review or even describe the big magic shows that I saw. Siegfried and Roy was the most amazing spectacle I have ever seen - with staging, costumes and effects that could not be described in words. The Jubilee Show at Bally's is also worth a look; this is an old fashioned Las Vegas show with topless showgirls in amazing costumes and head-dresses but it stars magician Dirk Arthur who did some fine illusions worthy of any Las Vegas stage. He worked with tigers, sports cars and helicopters as well as smaller stuff. His personality is a little weak but I had great fun watching the incredulity of his audience who were totally overawed by his magic. 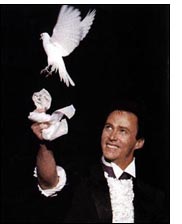 Rick Thomas has the longest running afternoon show in Las Vegas. I was invited by the President of The Magic Castle to see the show at which Rick was to be presented on stage with the Magician of the Year award by the Academy of Magic Arts. His show was excellent, with all the illusion and tigers you could possibly wish for in one afternoon and Rick himself has a friendly personality which gives an intimacy to the whole event. I won't say more - read last month's Magic magazine to get the whole story.

Finally - the master, Lance Burton (photo 3). Once again I will not divulge the show but the title of master magician was certainly given to the right man. His ease of manner adds to the enjoyment of the whole spectacle and you feel very at home watching him work.

So that ends my personal view of the magic shows on the Las Vegas strip. Of course, I haven't even told you about the magic at the World Magic Seminar..... yet!