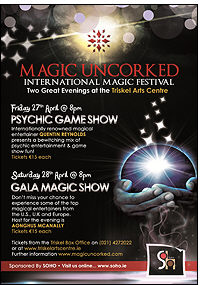 Magic UnCorked, The Irish Magic Convention 2012, will take place in Cork City over the weekend of April 27th to 29th. Sponsored by SoHo Bar and Restaurant, this unique event will attract magicians from all across Ireland, the UK, and beyond, to Cork City for a fun filled weekend of Magic and entertainment.

The convention itself will take place in the Ambassador Hotel, Military Hill. Our guest lecturers include some of the best in the business, from multi award winners to TV consultants.

Helder Guimarães – Helder is one of the best card magicians in the world. Originally from Portugal, and now based in the US, Helder has won numerous awards, the most prestigious of which was being crowned World Champion of Magic in2006!

Luke Jermay – Luke is one of the World’s top Mentalists! Such is his reputation, skill and knowledge, that he has worked as a consultant for Derren Brown and Criss Angel, and he is also the Magic consultant on the hit TV show ‘The Mentalist’.

John Lenahan – John is one of the most sought after corporate entertainers in the UK. He has hosted a number of TV shows including the BBC shows ‘Secrets of Magic’, and ‘Stuff the White Rabbit’, and ITV’s ‘Hoaxbusters’.

Diamond Jim Tyler – Jim is another award winning magician from the US, he is a regular performer at the World famous Magic Castle in California, as well a s an accomplished author and creator of many books.

Paul Gordon – Paul is another award winning magician and one of the UK’s leading professional close up magicians. He has also published many books and DVD’s on card magic, an area in which he is considered to be an expert.

Cormac Mohally - Cormac is Cork based circus/street performer whose work has taken him all across the globe, from New Zealand to Nova Scotia! A regular of the Street Performers World Championships, Cormac is one half of the well known duo 'Lords of Strut', and has spent over 10 years developing his own unique style over thousands of performances.

The Convention HQ is the 4 Star Ambassador Hotel on Military Hill. The recently renovated Triskel Arts Centre Christchurch Theatre is the venue for the 2 stage shows that will form part of the convention weekend. This remarkable building was recently restored to it’s former glory as part of a refurbishment program by Cork City Council. Not only was the building fully restored but it was also converted to a fully functioning modern theatre!

The Public Shows:
As part of the Magic UnCorked Convention there will be 2 shows open to the public, and these will take place in the Christchurch theatre on Friday 27th April, and Saturday 28th April.

Quentin Reynolds Psychic Gameshow has been described as “the most original and entertaining night I've been to in years! Through a series of psychic 'games' and 'experiments' Quentin wowed the crowd with his abilities! Whether you're a believer in the powers of the paranormal or a complete sceptic, Quentin's show was a perfect mix of merriment and mystery. He made every member of the audience feel a part of the show, and they were only too eager to help out on stage! A thoroughly entertaining evening which I recommend to everyone."

Our international Gala show will take place on Saturday night April 28th. The show itself will be hosted by Aonghus McNally, and will be a variety style performance featuring some of the best magicians in the world. From comedy magicians to mind readers, and illusionists this will be a unique show not to be missed. Performers include:
Helder Guimaraes
Luke Jermay
John Lenahan
‘Danger Boy’
And Laurent Beretta.