The Baltic International Festival of Wonder and Magic 'Miraculous Amber' 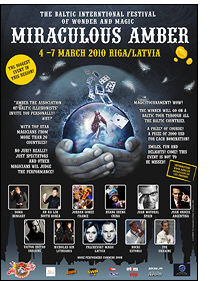 Riga… „Small Paris” on the cost of Gulf of Riga. Centuries wise and ever young. The romance of Middle Ages and tempo of modern living. The capital of Latvia grows prettier year by year and attracts tourists, business people and … magicians. In March next year wizards from twenty countries will gather here. Riga will host the Baltic International Festival „Miraculous Amber”.

On the eve of the Festival we invited Elena Palchevska/Grigorjeva, the Chairwoman of “AMBER The Association of Baltic Illusionists”, the author and main inspirator of the Festival to say some words about this event.

-- In August this year we have announced launching the second Baltic International Festival of wonder and magic “Miraculous Amber”, which is organized by our Association and which we presented officially at FISM. We have informed about the event and invited Eric Eswin, international president of FISM. Detailed information about the Festival, the program and terms of competitions you can find at our website www.aabii.eu. To avoid repeating I would like to tell you about two main aspects which distinguish our festival.

The idea of “Miraculous Amber” emerged a year ago, when the first festival of the Baltic Association of Illusionists was held with a bang and sell-out.

Even at that time we managed to amaze and gladden not only audience, but also magicians from various countries. Let me say it came as a surprise for everybody that there were no… professional jury.

The role of a jury was implemented by the audience; each spectator has got a special form with the details of the participants. The spectators voted for their favourite magician using these forms. And it was really a surprise for us that the audience voted for the illusionist, who was distinguished by us, professionals. The winner in nominations “The Best Illusionist of the Year” and “Professional Opinion” was one and the same performing artist – FOX from Ukraine. What does it mean? It means that the admirers of the art of magic represent sophisticated and demanding audience, which can not be deceived by mere “twist of the wrist”. The audience is expecting high level of mastership.

By all means we were pleased to hear from both spectators and professionals that the first fry was not bound to be a flop. Even more, we revealed a great interest exactly from the part of illusionists. Many of them came to us and said that such a bright undertaking most assuredly requires continuation. In short, “The festival will live”! – so we decided.

The main award – “The Best Illusionist of the Year”. We decided to preserve the main “jack” of the festival: there will not be a professional jury in the competition program as it was at the first festival. The favourite wizard will be chosen by the audience (participants of the festival) by way of from voting.

Our second “Know-how” (the ides belongs to our association), the second highlight of the festival is the magic tournament “The Magician versus Magician”. This can not be missed! Imagine that practically literarily in the non-stop mode during the gala dinner eight best illusionists will fight for the title “Master” in front of the eyes of the honourable audience. But this competition will by judged by the professional jury.

Here is the essence of this unusual tournament. The participant of the tournament must master the basics of manipulation and stage magic. “AMBER The Association of Baltic Illusionists” will choose eight dignified candidates and 2 alternate participants according to its opinion (for this purpose it is necessary to send video and link to the materials where it is possible to evaluate the mastership of the candidate to the specified address). The participants will be divided into for pairs by drawing. Each competitor will be given similar requisites (cards, rings, etc), about which they will get to know at the day of competition. It will be given one hour to prepare a 3 minutes act. The participants may use their own costumes, tables and music.

Finally, two main candidates for the title of “Master” will continue the fight showing their home works. The act should be bright, spectacular, artistic, intriguing. Finally, the leader is announced! He will get a prize in the amount of 2000 USD. But his opponent, who was not so successful this time, will get 500 USD.

I have told you just about two main competitions. There will be much more. The fights of wizards will be held in such nominations as “Professional Opinion” (the management of the Amber The Association of Baltic Illusionists has preserved the right to nominate the leader in this nomination); “Amber Hand”, in which the best illusionist in the art of micro magic will be specified; “Commercial Success”, in which the leader will be specified by the major sponsor of the festival. During the festival the winners in additional four nominations will be specified: “Prize for Courage”, “Most Beautiful Performance”, “Originality” and “Prizes from Sponsors”.

The Baltic Association of Illusionists will organize an international “Baltic Tour” embracing the towns of Latvia, Lithuania, Estonia and Russia for the winners in all nominations. This will be a very interesting, gnostical and fascinating journey of wizards across the Baltic towns.

During the festival all traditional events of the international congresses will be preserved: there will be seminars, magic fair and dealers’ shows.

And without doubt, the decent adornment of the festival “Miraculous Amber” will be four picturesque gala concerts. The opening ceremony promises to be the most vivid and spectacular event. We will certainly add national colouring, so that the magicians form all over the world could get to know people, the country they visit. The participants of the gala show are already known – Soma,Victor Voitko, Huang Zheng, Juan Moyoral, An Ha Lim, Nicholas Kin, Fox, Jordan Gomez, Juan Ordeix, Mr.Fix (Genady Palchevsky), Rocki, Victor Dobrovolsky,Vigintas Ushinskas and others.

But the main award for all participants of the festival will be the magic power of art of magic. One can not miss this event. One must see it.