Maurice Stanworth Howarth, known to everyone as ‘Mo’, was born on the 19th June 1922 and passed away on 21st April 2016 aged 93 years. His father Edward Howarth (known as ‘Ned’) had been an Iron Turner at the local foundry in Burnley and married Mo’s mother Annie Langley, a Cotton Weaver, on 30th April 1908. Mo had an elder sister Helen (‘Nellie’). Annie Langley became a proficient ventriloquist having been taught by her brother James Langley. Mo said his father was always forward thinking and quite a successful entrepreneur. Ned and Annie decided that her skill as a ventriloquist could provide the family with a new livelihood away from the toils of the foundry and the mill. Annie created her ventriloquism act and Ned became her manager. She arranged for Bert Aza to become her agent; he was agent for Gracie Fields. As ‘Josephine Langley’ Annie was very successful as a lady ventriloquist touring the theatres and music halls during and after the First World War as recounted in the book written by me and Mo ‘Josephine Langley Lady Ventriloquist : The Story of Mrs Edward Howarth’ which we published in 2008. Mo was delighted that we had been able to tell his mother’s story of how a Burnley mill girl became a successful music hall artiste.

It was a family joke that Mo had ‘appeared’ on the stage at the Blackburn Grand Theatre in 1921 when ‘Josephine Langley’ presented her ventriloquism act as she was, of course, expecting Mo at that time. At the age of 5 years Mo was taught simple magic tricks and ventriloquism by his father and mother ensuring an interest which extended over an amazing eighty eight years! He never stopped seeking to learn something new.

In the 1920s Great Britain suffered a long period of economic depression and as times became hard the family made a momentous decision to emigrate to America. In 1929 they went to Fall River in Massachusetts and also lived in New Bedford. ‘Josephine Langley’ continued to perform her act on occasions in the Chicago, Massachusetts and Boston areas appearing in “variety”. Ned meanwhile found work as a lorry driver during Prohibition, bootlegging illegal shipments of liquor. Mo, who continued his primary education in the America, had many exciting tales of those times and he sometimes rode along in the lorry. However, economic conditions in America were just as bad after the ‘Wall Street crash’ in October 1929 so the family decided to return to England. 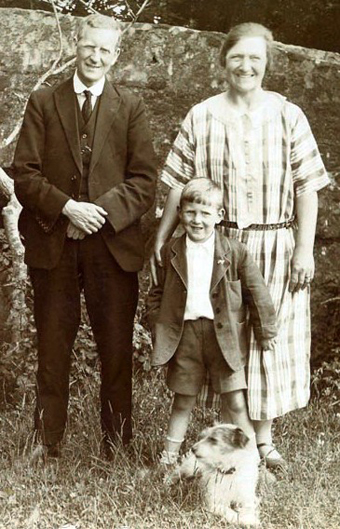 Mo with his parents just before emigrating to America

On their return from America Ned worked at the Burnley Victoria Theatre and as a boy Mo operated the “limes” (intense white lighting used in theatres at the time) and saw many artistes over the years. He remembered seeing in the 1930s and 1940s magicians such as Jasper Maskelyne, Voltaire, Chris Charlton, Jack Ledair, Les Levante, Benson Dulay, Cingalee, Claude Williams, Cingalee, Jack and Mary Kinson, the Great Benyon, Robert Harbin, Joe Stuthard and Maurice Fogel. Jasper Maskelyne was aloof and very strict with his staff. Robert Harbin was genial and very kind. He also recalled the ventriloquists David Poole, Raymond Smith and Arthur Prince.

Ned died in 1939. Despite his great love of magic, ventriloquism and the theatre Mo decided he would get a ‘proper job’. He went to work for the Prestige Group in Burnley which was well known as the manufacturer of pressure cookers and kitchen utensils. He ended up as Chief Draftsman in charge of the drawing office. It always caused him much amusement to think he had earned his living using a pencil long before the days of computer design. He also did engineering drawings on commission for other small businesses in the area. He always maintained an interest in engineering fascinated by anything mechanical.

During the Second World War Mo was not allowed to join the services as his job was classed as a ‘reserved occupation’ vital to the home war effort. So, he joined all the auxiliary services and spent much of his time using his drawing skills to draw maps distributing them among his colleagues in the Home Guard with the help of a friend who owned a motor cycle.

In 1947 Mo’s mother Annie died and sadly Mo became estranged from his sister Helen (‘Nellie’) as she inherited the house and made Mo move out. By that time Mo was courting his future wife Mona and he was able to move in with his future in laws. However, it was a family breakdown he did not like to talk about. Helen Yeadon was an accomplished ventriloquist in her own right and Mo’s nephew, her son John Yeadon did come and visit Mo in later years. John is a professional artist having lectured on the subject for thirty years at Coventry University. John’s elder brother, Mo’s other nephew is also called Maurice.

After the War Mo was involved with a concert party and through this met Ken Green who became his lifelong magical friend until Ken’s death in 1998. Ken had been a member of The Modern Mystic League since 1942 and Mo joined in 1947. At the time of his death Mo was the oldest member. Ken and Mo appeared at many magic dinners and events together and became regular features at magic conventions throughout the United Kingdom where their humour and practical jokes became legendary. Ken usually came up with something outrageous but Mo always went along with it! Mo attended nearly every Blackpool Convention since they began from 1953 until 2012 and held the record for the most guest performances (fourteen). He also went to many International Brotherhood of Magicians, British Ring Conventions.

Mo and Mona were married on 2nd July 1949. An elegant lady Mo said she taught him about many things such as food, cooking and dressing well. Mo was always well turned out and smart, seldom without a tie. Mona became a tax inspector working for the Inland Revenue. She was an enthusiast for amateur dramatics and a leading member of The Highcliffe Players in the Burnley area, taking part in many productions. She also became wardrobe mistress and at one time their house was full of all kinds of costumes and clothes. Although they had no children of their own they had family members and many friends. Mo respected Mona’s interest in the theatre just as much as she respected his interest in magic. Sadly Mona suffered much ill health before her death in June 1998. Mo keenly felt her loss. Lately his affairs were dealt with by Chris and Jim and Mo’s cousin Connie, a retired Doctor from London, also visited.

Following his retirement from the Prestige Group Mo took part time employment as a curator at Towneley Hall, Burnley’s historic country house and was sent on courses on art appreciation and antiques which he greatly enjoyed. He stayed at Towneley until 1987. When his aunt left him the necessary materials he had taken up oil painting specialising mainly in abstract art.

Mo became what would be described as a “semi-professional” magician, doing many shows in the clubs and for masonic events through his Manchester agent Ray Fenton. He worked in the Lancashire and Cheshire areas, holding down his full time job at Prestige at the same time. Mo’s speciality was “Josephine”, named after his mother; a hand figure constructed in front of the audience which came to life and engaged in witty repartee and singing with Mo and the audience. For Josephine and his opening item, the cut and restored bicycle tyre inner tube, Mo became very well known in the world of magic. 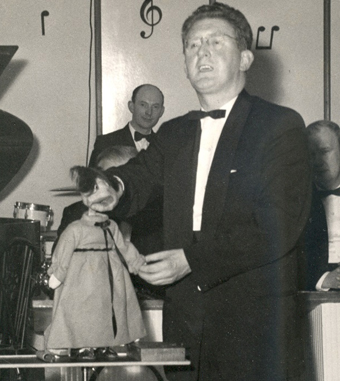 Mo performing “Josephine” at the Quaintways nightclub in Chester 1970

Mo was a keen member of the Modern Mystic League becoming President in 1962 and again in 2004. Ill health prevented him from taking up the post again in 2016. He was also Concert Secretary in 1955, 1959 – 1961 and together with Ken Green in 1980. He contributed a monthly column ‘Mo’s Moan’ to the MeMeL magazine for over fifty years. He was made an Honorary Vice President in 2009 and presented with a special card and gift at the meeting on 10th June 2012 to celebrate his ninetieth birthday on 19th June 2012. Incidentally he published twelve editions of ‘Mo’s Moan’ in the ‘Abracadabra’ weekly magic magazine and was amused to recount the story of being threatened with legal action by David Nixon’s Solicitors after his forthright comments about one of David Nixon’s TV shows! He also published some fourteen magic effects in the same magazine and invented several others including a card effect ‘Chinese Poker’ and ‘Growing Under Glass’ a production trick utilising a glass wrapped in newspaper. He was a member of the Order of the Magi, Manchester (being made a Fellow of the Order in 1981) and the Pendle Wizards, Nelson taking part in many of their shows. He was also a member of the Cavendish Knights of Close up Magic. 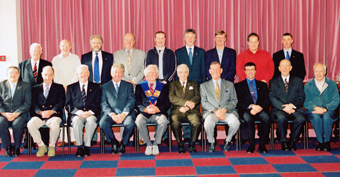 Mo as President of The Modern Mystic League 2004

I first met Mo in the early 1970s. However, I got to know him much more after Ken Green’s death when we began to attend many magic conventions and events together. He was good company and we talked about lots of things especially magic. Mo described himself as a liberal and liked to keep up with current affairs. He really enjoyed visiting the British Close Up Symposiums in Bath when we were able to visit various art galleries and museums as well and took part twice in the ‘Bizarre Bath’ comedy walk. When we went to the South Tyneside International Magic Conventions he loved to see the huge Scandinavian ferry ships passing by our hotel windows. He really enjoyed it when with Trevor we were able to attend The Magic Circle Centenary in 2005.

It was always a treat to call on Mo at his home or go out somewhere for a meal. He liked his food and drink and good conversation, particularly about magic and the latest tricks. He was well read and kept up to date with the magic magazines. He never seemed to lose his enthusiasm for magic. He just liked people, dogs and anything interesting to talk about. He was an inspiration to many people. 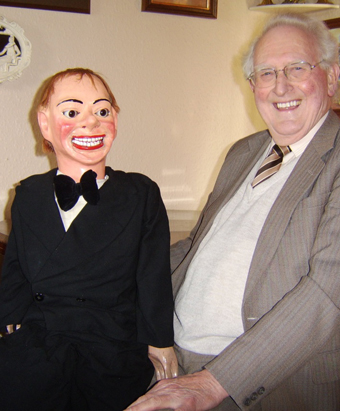 Mo loved the company of other magicians and being able to pass on his considerable knowledge of magic, theatre and stagecraft. He especially loved the comradeship of our Society. He liked the Workshop meetings and the opportunities to help each other. He presented the Modern Mystic League with the Mo Howarth ‘Tyro’ Trophy to be awarded each year to the most promising junior member. He helped so many magicians with his advice and constructive comments. I have never met another magician so enthusiastic and knowledgeable. He told a good joke, appreciated female company (his good friend Gabrielle was with him at the end) and liked a pint of beer. There are so many memories. We will all miss him so much. Rest In Peace Maurice Howarth; gentleman, uncle, draftsman, engineer, magician, ventriloquist, artist, raconteur, dog lover, friend and all round good guy.