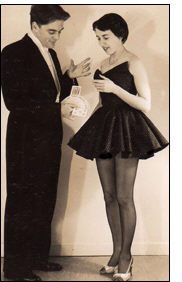 Although we knew that Ralph had been battling with cancer for a long time, it still came as a shock when we heard of his passing on February 28th, 2011, just two weeks after his 79th birthday. Ralph never made a fuss, he just got on with his very full life and only his close friends knew that anything was wrong.

Born in Rotherham, South Yorkshire, on February 13th, 1932, it was Ralph's brother who received the proverbial box of tricks as a present. He showed no interest, but Ralph did. Magic grew into a hobby and, for a while, a part-time profession. The highlight was when he and his partner Mollie won the British Ring Shield in 1959 with a sensational vanish of a rabbit from a clear perspex box.

After managing a branch of the travel agent, Thomas Cook, in Scunthorpe, Lincolnshire, Ralph and his bride Mollie moved to the small village of Everton, North Nottinghamshire, in 1966 and opened a grocery shop and newsagency. They put on a show at the village hall and the locals were very surprised to see that this very professional presentation featured the man who delivered their newspapers every morning and the lady who served them their groceries!

The one word to sum up Ralph would be "enthusiastic". He was an expert sleight-of-handster but also played the accordian and the organ - and he could juggle just about everything. The low ceiling of their cottage prevented practice, so the locals were amazed to see him on the local playing field with his clubs, cigar boxes and Diabalo. He could also be seen cycling around the village on his unicycle!

Ralph was one of a small group which we called 'Midwiz'. Seven of us used to meet in each other's houses in rotation, one day a month. This started almost 40 years ago and the "Secret Seven" is now down to the "Mystic Three". My lasting memory of him will be his squatting down on the carpet to show us his latest coin routine. Enthusiastic to the end, he even made it down to the IBM Convention at Eastbourne last September. We miss you, Ralph - and our condolences go to Mollie and their children Miranda and Michael. Rest in Peace.