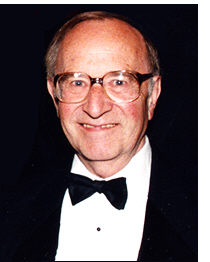 Born in Watford Terry’s first achievements on leaving school were on the running track where he became County Champion in the quarter and half mile events. In 1950 he was taking part in an event at London’s White City stadium and only years later discovered that another contestant was Alan Shaxon. On leaving the RAF in 1953 where he did his National Service Terry went first into banking and then into the insurance business, although magic was already in his life and he was doing shows, many with his wife Hilda. One insurance claim that crossed his desk was by Billy McComb whose name Terry already knew, so Terry made it his business to call on the great man personally, an event which led to a lifelong friendship.

Terry’s magic was always a vehicle for broad comedy. Because he wore prominent spectacles he called himself ‘The Four-eyed Lunatic’. His routines, mainly using audience participation, featured the burnt bank note which became his signature trick, and the cigarette through coat. He finally turned full time professional in 1974. In 1975 the BBC produced a magic series called ‘For My Next Trick’ in which Terry featured beside John Wade and Paul Daniels as the resident magicians along with many guests. The second series came out in 1976.

Terry rapidly became one of the busiest comedy magicians in the business and finally in 1980 appeared on one of the regular variety bills at the London Palladium with Linda Baron, TV’s ‘Wonder Woman’. He did TV with the Grumbleweeds and Ken Dodd, and appeared on variety concerts with stars like Dame Vera Lynn, Sir Cliff Richard, Sir Harry Secombe and Sir Norman Wisdom.


In 1974 Terry made his first trip to the USA, to an IBM convention in Little Rock Arkansas. In all he made nearly 100 trips across the Atlantic, as well as many cruises. A less glamorous trip was in 1982 when he spent 13 hours sitting on the floor of an RAF Hercules plane to do shows for the military in the Falkland Islands.

Around 1975 Terry first went to perform at the Magic Castle in Hollywood and the Americans took to him in a big way. He was a star at many American magic conventions and built a big following. He received many awards from the Academy of Magic Arts and Sciences culminating in 2004 when he received the Masters Fellowship. He had already been awarded a Performing Fellowship and was twice nominated as Lecturer of the Year. He is also in the Society of American Magicians Hall of Fame. In Britain he received the Carlton Comedy Award from the Magic Circle, and in 2009 the prestigious Maskelyne award. He was a Gold Star Member of the Inner Magic Circle and a Life Member of the Academy of Magical Arts, as well as becoming g President of his local Watford Society of Magicians. He also became a member of the famous British show business charity The Grand Order of Water Rats.

Terry wrote two popular books, both published in the USA. ‘Seabrooke’s Book’ in 1986 and ‘Beyond Compare’ in 1993. He wrote a column in MUM for twenty years for which he received yet another award from the Society of American Magicians.

Terry was taken ill with cancer in June 2010 and although that operation seemed to go well enough sadly Terry never came home again, ending his days peacefully in a nursing home. His wife Hilda, his daughter Diane and his son Keith were all with him at his bedside. Magic has lost one of its most colourful, funny and creative characters and I’ve lost a good drinking buddy.