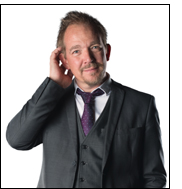 I first met Tim Stracey at Illusions Magic Bar 11 years ago. The first thing that I learnt about Tim on meeting him is that he had caught the magic bug hard. Even though he came into magic in his 30s he was a natural performer. Over the years Tim and I became friends working together at Smoke and Mirrors and doing our individual shows at Byzantium. They were very experimental but always fun. I saw Tim go through some tough times but he was always upbeat and positive even when he was sick. I used to visit him and we used to talk magic and theory of performance and laugh so much.

After taking a break at the start of his treatment, I was so proud when Tim started performing again with as much vigour and energy as before. He didn’t stop until right up to the end and one of the proudest moments of my career was to compere what would sadly turn out to be his last show. He received multiple standing ovations and the message of the show was that magic is real. The thing about Tim is that when he performed magic he truly believed in what he was doing and he was able to bring that to the people he performed for. Tim was a great friend and a truly exceptional magician. I will miss him dearly.

Tim Stracey not only was a cracking magician, but also a person who thought of others first, passionate about every performance. Tim helped me launch the House Magicians Comedy Magic Show back 2012. Back then he was not the same magician we all came to love, he was this full blown mentalist magician who on occasions would believe he actually guessed the correct coloured dice or that the spectators cat had recently passed, we of course had to remind Tim that a trick and the Facebook post was actually the real reason. But this showed how much he wanted his spectators to feel that sense of wonder and keep them on the edge of their seat. I urged Tim to add humour to his show as that was actually who he was, a warm and naturally funny magician, and I also like Kieron was privileged to share the stage with him for many years.

Tim went from my show to become the resident magician at Krowd Keepers in Bath and you can see from his TripAdvisor reviews that everyone loved him. I will miss his friendship but I will never forget the memories we made.

What else can I possibly add to this? Tim was magic. Through and through. To all of his family and especially to his small daughters Jasmine and Charlotte and to my children too. He was so proud recently that he was teaching them some magic basics and giving them the same passion that drove him right to the very end to keep rewriting his shows and to give our friends the best evenings as he spent December performing every weekend.

I remember being invited to his show on our second date and thinking “This is possibly the strangest second date I’ve been on!” but he blew my mind that night and a very special promise passed between us that he would never tell me any secrets because I just did not want anyone to take that magic away from our life.

Tim is loved by everyone who knew him and his work in mental health in recent years was extremely important to him. He posted many videos in recent times about his journey through, a particularly nasty cancer, and would be proud that I now ask a predominately male (but also female) audience to be very vigilant about their health and to seek advice from professionals if anything seems wrong.

He was so proud to get his membership to The Magic Circle and it will be a day I will remember with him forever. Thank you to all that made it happen for him.

Our thoughts are with all of his family now.