A Lifetime in Magic Volume 2 by Devin Knight

Softback. 116 A4 pages
Published by Magicseen 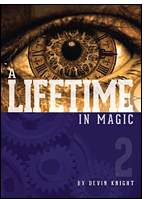 Having never heard of Devin Knight, the first volume certainly established that here was a performer who knows what he is on about. The first volume was packed full of good-to-great magic. And the second volume doesn’t disappoint. It’s rare to read such devious methods (outside of Tenyo obviously!) combining showmanship, subtlety and clever thinking effect after effect. This is another volume of strong mentalism and mental magic. Let’s look at the contents.

The first effects aim to achieve what appears to be real mind-reading. The first, ‘Think of a Hand’ is one of those that most will pass by without trying (I did) but know you’ll get fried when a Berglas-type does this on you and blows your mind. ‘Challenge Think of a Card’ is another that, when you ‘hit’, looks like genuine mind-reading. The method involves another type of genuine reading, but it’s not of their mind. And then we have ‘Super 52 Card Challenge’ which reads like a miracle. Each of these three opening effects in the book do require a performer who presents with authority and seriousness as opposed to comedy mental magic. The methods are ballsy and, according to the author, ‘hit’ literally all of the time. When they do you have a miracle. These types of effects and their methods aren’t the kind of magic I perform but I can see how, in the right hands, they could become reputation makers.

The next chapters cover a series of effects using Devin’s Sanda Panda Mystery Box. The thinking here is ingenious. Each effects appears like genuine predictions. One example; the closed box is on the table. Any man is asked to stand and tell you the first name of his partner. Assume he says, ‘Sandy’. He comes forward and removes a rose from inside the box. Attached to the rose is a note that says, ‘give this rose to Sandy.’ No stooge or pre-show blah, blah. This box is a simple, ungimmicked box with a lid (think of the Gozinta Boxes) where the base is as deep as the lid. Your hands appear empty and the box is ‘shaken’ open, allowing the base to drop from the lid. It appears impossible for you to have any control or to add anything to the contents. Devin covers card predictions, a book test and signed cards appearing folded inside the box. The routining is clever. And the principle can be used in many more effects. Six routines are described in this chapter.

Clip Sight is the main core of this volume. A special clip board allowing you to do many mental miracles. One personal highlight is the Headline Prediction Effect. If you’ve studied methods elsewhere, it would be a sound investment to explore this version. The board appears (and is) innocent and, like almost everything in the book, won’t cost you much to make it up. I think this board is, again, quite ingenious.

The final four effects in the book are equally powerful with smart thinking and handling.

Devin knows about performing conditions. He often uses movement and stagecraft as part of his methodology. Combined with psychology, subtleties, gimmicks and plots, the audience has very little chance to fathom the methods beyond what appears to be genuine feats of mentalism.

I must add a caveat; I’m not a mentalist. Throughout my performing career I did a lot of comedy mental-magic. I read a lot of mentalism books and so feel justified in saying that these routines and their methods are clearly the result of years of performing, studying and working. If you already have the first volume of this proposed trilogy, I don’t think you’d need any convincing to get this second volume. And if you’re new to Devin Knight (as I was) I’m sure that either of the current two volumes will make you a fan within minutes of reading an effect or two. For magicians who don’t consider themselves mentalists, I would say there is a lot to be learned from these books by understanding Devin’s process and the structure of theatre he brings to the effects for maximum impact.

The second volume matches the first, being produced on quality paper with a soft cover. The explanations are accompanied with clear photographs and every detail is explained. Highly recommended.