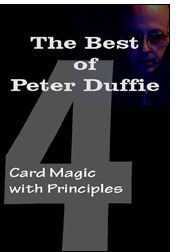 Prior to the appearance of ebooks, Peter Duffie published any number of limited edition manuscripts, most of which are hard to find these days. Recently Peter has been sifting through his master copies of these books, extracting various plums and offering them as “Best Of” collections. As the title of this current effort clearly puts it, this is volume [4].

Actually, what I think is really the Best of Peter Duffie is not so much the routines, which are stand alone and diabolically clever, but the way his routines stimulate my own thinking. What passes for my own little grey cells become very active whenever I work through Duffie’s deceptions.

I have most of the originals, but they’re in the box-that-cannot-be-found, so this and the earlier three books are a thoroughly modern way of regaining access. Less ancient card fans than I will be harvesting Duffie material for the first time and enjoying the ride. If you haven’t yet started your Duffie collection, this is a good place to begin. If you’ve already got the first three “Best Of” volumes, you’ll want this.