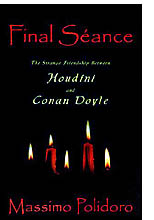 Final Séance is an account of "the strange friendship" between Harry Houdini and Arthur Conan Doyle, the strangeness coming from the Doyle's passionate belief in Spiritualism and Houdini's damning campaign against fraudulent mediums in the 1920s. Ultimately it brought them into conflict but their acquaintance began on much friendlier terms and it is the growth of that relationship that Massimo Polidoro charts in this book.

Both were famous, Houdini for his escapes and daring stunts, Doyle for his tales of adventure and the creation of the world's most famous fictional detective, Sherlock Holmes. Massimo is unable to pin down exactly how they met but they exchanged ten letters in two weeks (quicker than email!) and found common ground in the discussion of Spiritualism. Houdini deliberately played down his scepticism and Doyle took him to be genuinely "open minded" about the nature of the After Life. There's no doubt that each respected the other and that their friendship extended beyond mutual admiration. But Houdini had long been a debunker of fraudulent psychics while Doyle, for all his literary talent, had a capacity for credulity that was simply stunning. The Sunday Express said of the esteemed author, "he is stark, staring mad on the subject of the dead."

The friendship was always fragile, beginning with a bout of one-upmanship. If one told of how many books on Spiritualism he owned, the second would beat it and then add that not only did he own them, he'd read them. Each told the other increasingly bizarre tales of the mediums they encountered. Doyle appears utterly sincere in his belief of paranormal phenomena, convinced not only that stage telepathists the Zancigs were genuine but that Houdini too possessed special powers that enabled him to bring about his escapes. Houdini, on the other hand, was forced into playing a fine game of trying to retain Doyle's friendship while at the same time being driven to distraction by the man's obsession with Spiritualism. Neither was open to persuasion by the other.

The two collided regularly over the demonstrations of individual mediums, Doyle taking their side, Houdini asserting trickery. It came to a head over the case of Mina Crandon, otherwise known as Margery the Medium, the wife of a doctor who had entered a contest set by Scientific American magazine to find a genuine psychic. There was a prize of $5,000 to be had and Margery had almost won it when Houdini intervened and demanded that he, a member of the committee set up to adjudicate the tests, be allowed sit in on the séances. With the great sceptic in place, events soon took a different turn. Houdini pronounced Margery a trickster; Doyle in turn denounced the great magician's aggressive tactics, which he thought were designed to find fraud whether it existed or not rather then help "fight for the truth."

Massimo has done an excellent job of chronicling the transformation of friendship to feud and at the same time providing an insight into the mediumistic phenomena of the time: levitating tables, spirit photographs, materialisations, ectoplasm and even flower productions. Seen as acts of showmanship, each medium of the day strove to give a performance of novelties worthy of top billing on any variety programme. That the dead did make contact was almost a bonus.

It may seem incredible now that any one believed that mediums hidden behind screens in already darkened rooms were truly contacting the dead but the fact that Houdini and Doyle crossed swords over it shows how deeply held and widespread those beliefs were. Today infrared and low light photography has all but finished dark room charades but other nonsense has taken its place and equally eminent men and women argue still over it though the venue is more likely to be a television studio than a science journal. Meanwhile, the topics that divided Houdini and Doyle continue to find an audience.

Final Séance is not the first book to examine this topic. Houdini and Conan Doyle, published in 1932 and written by Bernard M. L. Ernst and Hereward Carrington, covered the same territory. Indeed Massimo credits the earlier book for as the source of many of the letters between Houdini and Doyle used in the present tome. But Massimo has managed to incorporate more recently published information, especially concerning Houdini, from sources such as Kenneth Silverman's biography Houdini!!! and Gabriel Citron's The Houdini-Price Correspondence, weaving them together to provide a more contemporary retelling of this tale.

Massimo himself is an executive director of the Italian Committee for the Investigation of Claims of the Paranormal, and the book is published by Prometheus, a firm noted for its sceptical works. So naturally you'll find the book more sympathetic to Houdini's point of view rather than Doyle's. But the author rightly concentrates on the tale itself rather than the truth about psychic phenomena, illustrating it with a good number of photographs and providing useful references for the material. Doyle and Houdini knew each other for five years and because of their place on the spectrum of belief much has been made of their relationship. After reading Final Séance I do wonder whether that relationship has itself begun to take on mythical status perhaps taking on greater significance than it ought. Nevertheless, it makes for enjoyable reading.

The title, Final Séance seems to refer to the final Houdini séance held in 1936, ten years after Houdini's death and six years after Doyle died. Neither spirit had the courtesy to turn up for the occasion so don't expect a spectacular finale. The issues that destroyed their friendship remain unresolved, both taking their beliefs to the grave. Whether Houdini is even now apologising to Doyle and admitting what a fool he had been, we will all know soon enough.

To order a copy from Amazon.co.uk in association with MagicWeek Click Here