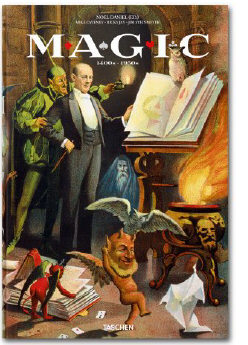 So what does it contain? It is a history of magic between the title dates told in a lavish display of prints, posters and photographs with themed essays. The authors are the well known Mike Caveney and Jim Steinmeyer who master mind the biennial Conference on Magic History and know more than most about the subject. Each chapter is written by one or the other in English then translated in German and French. The illustrations are not, of course, repeated but captions are always in the three languages. This layout and the thematic structure occasionally results in slight repetition and zig-zag diversions from strict chronology but it could hardly be done otherwise with a multi-lingual text. There is an introduction by Ricky Jay, another noted magical historian.

It is designed for the general reader rather than the scholar and practicing magicians will not find any trade secrets exposed. The text follows familiar ground but is supplemented and amplified by the 1000+ rare illustrations which bring to life little known names and anonymous performers. Even a book of this size cannot be totally comprehensive or definitive but nothing of importance seems to have been omitted.

As may be expected, in the “golden age” age chapter there is an emphasis on USA magicians and perhaps to European eyes an over-abundance of Kellar and Thurston. Completely new to me was the fascinating account of travelling tent shows in the southern states and the shows known as Chautanqua which toured in the manner of circuses.

There is unlikely to ever be another book to compete with this one and the very nature of its uniqueness defies criticism. (Although, personally, I could well have done with a little less Houdini.) The illustrations have been assembled from many sources and very few are familiar. A veritable feast for the eyes and I recommend you to sit at a table to read the book as it is difficult to cope with otherwise.