The definitive, step-by-step guide to making good money from magic and mentalism 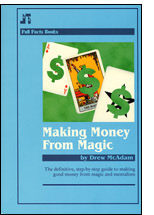 I wish Drew had called this book Making Money from 'Psychic' Parties and Tarot Parties or something along those lines. The author is clearly an expert in that field and passes on useful information and knowledge... the book would have received a four or five star rating.

But instead the book's called Making Money From Magic - The definitive, step-by-step guide to making good money from magic and mentalism. If you are going to put "the definitive guide" on the front cover of a book then you'd better make darn sure that it really is the definitive guide - this simply isn't.

Instead we have a book that in the main focuses on a niche market - presenting "psychic" and tarot parties to small groups of people in their own homes. Some other types of work are covered, but in no real detail.

If I wanted to turn a hobby/passion into something more, and bought a book titled Making Money From Magic - The definitive, step-by-step guide to making good money from magic and mentalism then I'd naturally assume that it would cover the full gauntlet of performance opportunities open to magicians and "mentalists" (more on that word later) and how to make money from those opportunities.

And if you're going to call it "Making Money From Magic" then you'd better talk money, and how much. I only remember money being discussed twice in the whole book. Once in a "double your fee" piece that had me very worried, and once under Psychic Parties: "If your clients arrange parties for groups of six at £20 per head, that's £120 for a maximum of three hours work. That's £600 for a five-day week (only working weekday evenings). That's £30k per year, allowing for two weeks off in the Bahamas. And the overheads? A mere pittance."

I think you'd need more than two weeks off after that lot. And two weeks off in the Bahamas could easily cost you 15% of your annual income on those calculations - that's assuming you work 5 nights a week, 50 weeks of the year... (and that you want to!).

In one of the main sections titled "Attitude Towards Your Publicity" one of the headings is "Why You Don't Need Advertising." It talks about press releases, local radio, even writing a psychic column in your local newspaper, and, rightly, covers the importance and worth of good word of mouth. But to advise readers not to advertise is, in my opinion, really poor advice. I know a number of very successful magicians who budget £2,000 - £3,000 per year on advertising, spread across the internet, directories, specialist directories, and specialist publications. Their earnings are in the £50,000 - £60,000 bracket and advertising is a major contributor to their success. (Talking of which there was no mention of The White Book anywhere, or other industry publications and specialist magazines.) Volkswagen sell a lot of cars thanks to good word of mouth, but they also sell a lot due to their advertising, and spend many millions on it every year... there's a reason, the two should go hand in hand.

Drew has a website which includes information about his services. The website address is included in any flyers that he hands out to prospective clients, samples of which are included in the back of the book. But to be frank the site isn't up to standard and is the equivalent of a home printed do-it-yourself business card. It is also plagued by a pop-up advert from the company that hosts it, which suggests that the site is either free or cheap - not a good image to portray: www.drewmcadam.co.uk. For someone producing "The definitive, step-by-step guide to making good money from magic and mentalism" I would have expected far better. Publicity material should always be top notch.

In his publicity hand-out for his Psychic Parties (reproduced in the book) Drew writes "For those of you who don't know, a Psychic Evening is a gathering of friends and neighbours at which a mentalist demonstrates feats of ESP, mental mysteries, and paranormal phenomena." The word "mentalist," in a post Alan Partridge / The Office world, is not a good word to use on your publicity. For many people in the UK it has only one meaning. Click Here and Click Here (mentalist1 n. Brit. informal an eccentric or mad person).

I'm afraid I've focused on what I consider to be some of the book's bad points, but I couldn't let them pass.

However there's also plenty of good stuff on offer and it is always an enjoyable and interesting read, and is based on Drew's own experiences. I read it cover to cover and at times even found it hard to put down, not always for the right reasons, but hard to put down none the less...

If you are thinking of turning professional, and your main interest is in psychic/mind-reading type work, then don't hesitate to buy this book. The more you amass on the subject the better. To reiterate, if it had been called Making Money from Psychic Parties and Tarot Parties it would have received a four or five star rating without any question.

But, as it stands, with the title Making Money From Magic - The definitive, step-by-step guide to making good money from magic and mentalism it only just qualifies for three stars, as the contents didn't live up to the book's very bold title.

Available exclusively from www.ianrowland.com (from the 'Magicians Only' section) £20.00 plus P&P