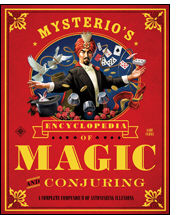 Finding a new twist on magic books aimed at the general public is always hard. Having written a couple myself I know the difficulties. Can you do something more than trail through all the other books which are already out there and extract those tricks which are considered to be in the public domain?

Gabe Fajuri has certainly done that – but I’ll come to that later. I’ll begin though with a comment on the tricks which he has included. The first thought is that some might be considered ‘too good’ for the beginner in magic, which this book is clearly aimed at. Paul Curry’s Out of This World, the Sub Trunk, Headline Prediction, Crazy Man’s Handcuffs and Equal and Unequal Ropes are explained in detail, to name a few which are in the repertoire of many a professional magician.

Personally I don’t have a problem with any of that; from Hoffmann’s Modern Magic right through to Pat Page’s The Big Book of Magic, exposure in magic books has always proved controversial; but has never proved to have a detrimental impact on anybody’s career. And, of course, with the Internet, the printed word sadly has even less relevance to most people starting out in magic than it did a few decades ago.

So Gabe Fajuri, as one would expect from the associate editor of Magic magazine, has chosen excellent material and described it comprehensively: he has also been careful to credit where appropriate. The tricks cover the whole gamut of magic from body magic, cards, coins, close-up, rope, mind reading, silks, stand-up and illusions. By no means all the tricks are self-working either – there are good sections on basic, and indeed not so basic, sleight of hand, particularly with coins, cards and the cups and balls.

So, apart from possibly over-advanced material, how has Gabe Fajuri made this different from so many similar books of this ilk? Well he has used the conceit that he extracted the tricks from the manuscript and notes of the Amazing Mr Mysterio, a man who supposedly rivaled Harry Houdini and Howard Thurston, before his untimely death on stage in 1936.

Needless to say the verbal juggling hoops that Gabe has to jump through to somehow sustain the illusion of this fictitious magician is fraught with pitfalls: principally as many of the tricks he has included were created long after Mr Mysterio’s apparent demise. Indeed one of my favourite quotes from the book precisely highlights this dilemma: “Had the effect been invented in Mysterio’s lifetime, it would certainly have become part of his regular repertoire of card miracles.” Quite.

To be honest it didn’t really work for me; the occasional lapse into the flowery English of what is alleged to be the original manuscript didn’t fit well with the description of the tricks in contemporary English. And I can’t see why a magician who died over seventy years ago who, by definition, nobody has heard of, would appeal to the book’s target audience of today’s youngsters.

I hope I’m wrong – because this is definitely a book I would recommend to anyone starting out in magic; and indeed quite a few who have been in it for rather longer. I can guarantee that forking out £10.99 for this 340 page, excellently illustrated, soft back book, would pay far greater dividends than spending twice on that for the latest DVD.