by Tom Craven and Paul Gordon
Reviewed by Ian Keable 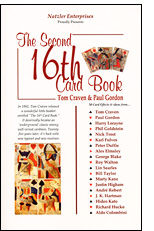 This is a book of a very clever principle looking for a good trick. It is known as the 16th Principle, whereby if a card is 16th from the top or face of the pack it can be located by sundry methods such as faro shuffling, reverse faros and down/under deals. It was originally bought to light by Alex Elmsley – reproduced in this book under the title 7-16 – and it must be said his ‘Australian gambling’ presentation his hard to beat.

That of course hasn’t stopped other magicians having a go. Tom Craven seems to have started the ball rolling with his 16th Card Book, which was published in 1982. The Second 16th Card Book is a reprint of the original 16 (geddit?!) tricks, together with an additional 31 tricks. If you are into unusual dealing, faro and milk shuffling, mathematical calculations, memory and counting tricks (sometimes all in the same trick!), then this is the book for you. Personally I would find it hard to make such tricks entertaining for the lay public – although I am sure some of the illustrious contributors – including Phil Goldstein, Nick Trost, Roy Walton, JK Hartman, Karl Fulves and Peter Duffie amongst others – may succeed in doing so. One trick in particular, besides Elmsley’s, I must single out as an exception: Lin Searles’ Moracle, which combines a prediction with a kicker finish of cutting to the four aces, I would certainly consider performing.

I suspect however that most of the tricks are best for fooling your fellow magicians who are happy to sit through convoluted procedures; or indeed – which I did frequently – to fool yourself when you work through them.

The book is well produced, most of the moves are adequately explained (although I had to look up the Klondike Shuffle from another source) and I am sure will inspire other variations of the 16th Principle. Just make sure you keep the majority of them away from the lay person!