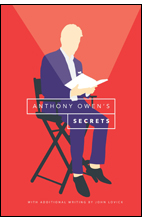 It is no secret that I am a huge fan of Anthony Owen. He has not only created some of the most popular television magic shows in the past few decades but also created many highly original effects - some of which I currently use in my professional act. One such routine is his natural lottery - where you show a lottery ticket that has the very numbers on it called out by the audience. This has been my opening for years and is only one of so many wonderful effects you will find in this book. It really is a smorgasbord of magic ranging from stand-up, cards, coins, mentalism to effects based on television themes. What makes this so special is that the effects are often in collaboration with some of the best minds in our business - and the final effect is not only super strong but practical for the performer. If you are after magic you can definitely add to your act this is the one.

Magician, mentalist, producer - Anthony Owen is a creative force to be reckoned with. Whether in television, mentalism, or in the repertoires of his fellow magicians, his influence can be felt far and wide. Now he brings together a collection of his favorite "Secrets" from a lifetime of magic just for you. This superlative compilation consists not only of mentalism, for which he may be best known, but also close-up and parlor/ stage effects that will inspire and get your creative juices flowing. You'll be treated to effects with cards, coins, sleight of hand and mentalism (of course!), but this just scratches the surface. You also get miraculous routines using Anthony's favorite adhesive utility item, Changin' Glue; Out of this World effects; amusing anecdotes from a lifetime in magic; a section about television magic that any aspiring TV magician needs to read; and lottery and popular game show effects that will simultaneously amuse, entertain and baffle parlor or stage audiences. This volume is packed with material for magicians and mentalists alike, and will likely sell quickly. You don't want to miss out. So, pull up a comfy chair and Anthony Owen will let you in on the real Secrets of magic. Order your copy today!

MY THOUGHTS: Where do I start? I first discovered Anthony's magic when I was researching a lottery prediction routine and by chance came across his version. I bought it and immediately saw the huge potential in it. It was not only the easiest but certainly most practical and went in to my immediately, where it's been ever since. This is exactly what this entire book is about. It's over 25 years of material he's either performed or created for others to perform who are out there working every day, and yes the Natural Lottery routine is in the book. This is a book that I keep very close by because each time I pick it up I discover another gem. There is everything in here from the self-working card routines to routines requires skill and what I would claim to be the most devious matrix routine I've ever seen.

The book has eight chapters which are; Sticky Tricks - 14 effects using something special Anthony discovered and many additions by well known performers such as Andy Nyman, Sebastien Clergue and John Lenahan. This chapter alone could be a book!! Perhaps my favorite is an oil and water routine called SOBW with the additions by Sebastien. Signed Card to Anywhere is pure genius and based on a Chuck Fayne idea - but as they say in many adverts for tricks these days, "on steroids." As soon as I read this I knew I would make it up for my own act.

SLEIGHTS AND SORCERY For those that love card sleights you'll enjoy working through this chapter. You will learn The Caravan Move which was created in an attempt to strengthen the Arthur Finley Tent Vanish. You will also learn a Window Stealing Bottom Palm, which I wish I'd discovered years ago and one hell of a finish to Ambitious Card which follows the classic Pop-up Card move. Anthony has such novel and wonderful little twists to some classic plots and ideas that enhance what has come before.

COINS - here you will find Anthony's handling of the classic pencil Through Coin. This has a really novel twist that I just love and am going to revisit this classic myself. The Elevated Matrix routine is brilliant - it's so damn deceptive I wish I had seen it performed before reading how it worked. I know it would have fooled the heck out of me. Super super clever and so easy to do.

OUT OF THIS CHAPTER - my favorite effect must be Out Of This World and the three versions offered here are all worthy of being sold as tricks by themselves. In the first version the deck can be shuffled by the spectator, every card is dealt by the spectator throughout, and there is no requirement that you stop halfway through and swap piles. Read that again! The method is so clever and quite easy to master. The next version called OUT OF THIS HOUSE is inspired by Lennart Green's Angle Separation which I love and this has finally given me reason to add it to an effect (the move is similar but different application.) Finally Out Of This Book From The Library, a great twist and stand-up routine on the classic plot. You will need some special cards but it's well worth gathering them up to perform.

CARDS - Four effects are taught here including one that instantly struck me called "The Birthday Deck." I love the way this trick becomes special because it involves a persons birthday and so they can easily connect with this.

SITUATIONAL SORCERY A variety of magic from matches to silks. A Meal For Monteneuf is a very different stand-up routine using six knives and a unique twist of an X-Ray!! Perfect Match is a terrific little routine using a book of matches - permission was granted to publish it in my magazine Vanish.

MENTALISM So much material here it's hard to know where to start, however my all time favorite routine by Anthony is all here called The Natural Lottery!

TELEVISION TRICKERY These stand-up effects are based on popular television themes and of particular interest to me was Deal or No Deal - a great theme for "Bank Night" or "Just Chance effect." There is also a very novel effect where you pour yourself a cup of coffee, then in your mouth you are able to separate the ingredients including the milk, coffee and sugar. This book is FILLED with gem after gem. As I told friends who asked, "this book is BLOODY FANTASTIC." There are no pipe dreams - it's all material you can perform and many people are performing the routines from here in their own repertoires. I also want to thank Vanishing Inc. (Andi Gladwin and Joshua Jay) for producing this high quality book. It is hard bound with illustrations by Tony Dunn and over 230 pages. This definitely goes to the top of one of my favorite magic books list and it should go to the top of yours. If you are looking for magic you can put in your stand-up or close-up act then this is definitely the place to look. There is something for everybody in these pages. You will also find an Interview with Anthony as well as a chapter on television magic which is filled with tips and advice from somebody who knows more about this genre than anybody. 5 stars