The story of the Nazi’s Favourite Magician 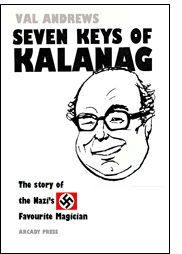 Val Andrews wrote Seven Keys of Kalanag in 1987 and it was limited to 200 copies. It has now been republished by Arcady Press (a joint venture of Pat Page and John Alexander). Kalanag was an unusual subject for Val as most of his historical books tended to be about magicians who he especially admired.

Kalanag – real name Helmut Scriber – by contrast, was a difficult man to like. A member of the Nazi party, a man happy to perform magic for Hitler, somebody prepared to expel members from the German Magic Circle and very likely an opportunist who stole Nazi war loot after the war in order to finance his subsequent career as an illusionist.

Val was never somebody who erred on the strict side of historical research when encountering an entertaining anecdote (which always makes his books a delight to read). But in this fascinating paperback of some 110 pages, Val has rarely ventured into mere speculation. Kalanag’s true story is too dramatic to require it.

For magicians, undoubtedly the most revealing part of the book is a description of Kalanag’s stage show - which Val saw. There is always much to be learnt from performers and in Kalanag’s case these include his excellent choice of material (a stand-out being his version of Any Drink Called For, known as ‘Wunder-Bar’), his ability for self-promotion and his determination to tour a massive show at an age when most magicians are thinking of cutting back to one suitcase.

The book is well illustrated and has an additional chapter by Richard Hatch, reprinted from his article in MAGIC magazine. All in all a historical book well worth reviving. Kalanag deserves to be remembered not only as a good (if not great) illusionist; but also as a lesson in how even magic is not immune from the evil tentacles of a horrific regime.

The price is £12 post free in the UK from www.arcadypress.co.uk