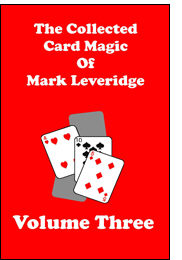 This is the third collection of card magic routines from Mark Leveridge. This compact soft-backed book runs to 74 pages and is full of commercial card magic. 12 routines are features, many having been previously marketed. A few are still sold through Mark's online shop, complete with props. Let's crack open the cover (easy to do with a soft-back) and have a look at the routines.

Aces Under Control; from a shuffled deck, the performer produces the four Aces. Oh, from the centre of the pack. Based on an Al Smith idea, and a Dai Vernon move, this is a nice production of the four aces. It looks like tremendous skill yet requires very little handling. Perfect for giving the impression you're an expert with the pasteboards!

Co-inic-mental; A do-as-I-do effect but with a lot of the waffling and procedure removed.

Countdown prediction; this prediction would certainly baffle most magician's I think. A sneaky method based on a well known shuffle. This'll have the local magi scratching their heads!

Excalibur; Mark's take on the legendary card-stab using a legendary prop! This is still in Mark's current catalogue. Although the signed card doesn't end up stabbed on the miniature sword, the deck is divided perfectly, whilst wrapped, at the point of the selected card. The full patter provided shows that Mark has used this extensively in his commercial close-up work. A neat effect that can play big, with lots of scope for business and interaction.

Spot The Difference; taken from the Master Routine series, this effect is based on the Find The Lady/Three Card Monte, but with a novel gimmick making the handling simple and effective. A presentation is provided to work this for larger shows using the whole audience.

The Department Store; A nice presentation idea for the sandwiched card effect, with a kicker ending. Great for family restaurants.

Pre-View; A baffling card effect, where a sighted card ends up in an envelope, placed their before the card was even sighted! The use of a cleverly gimmicked envelope removes the need for any sleights or illogical moves. Well routined and very magical.

Signature Piece; A magical way to leave your business card with the spectator. Also a nice business card to make as it has a Bicycle card back, opening the way for many other variations.

Hide and Seek; The ambitious card in reverse. Four stages of well routined magic, perfect to do walk around. Instant re-set and a kicker finish.

No Palm Card to Pocket; Very magical, clean and surprising way to vanish a signed card from a wrapped deck. Great stand-up piece.

The Right Wrong Prediction; Surprising routine which would work well for a parlour show. The possibility for presentation and bits of business is good and the outcome quite magical.

Unavoidable Destiny - Reloaded; Mark's latest version of the Brainwave deck, using one deck, no rough and smooth and great thinking! The presentation and build-up is perfect for modern mentalism close-up.

Individually the price for these tricks would far surpass the book. Whilst a few items would need to be made up, many can be performed with a regular deck and no advance preparation. Close-up, mentalism and stand-up are all included. This is great value for money and will give many happy hours of pleasure playing with the magic, whether beginner, amateur or professional. Highly recommended.