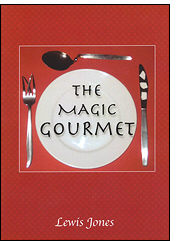 The book is printed and bound in England by Biddles of Kings Lynn. Now there’s a name to conjure with. If they move to newer premises will that qualify as a Biddle Move? Yes, I know. Groan.

This is not a brand new hot-off-the-press next week book. It’s been on general release for a couple of years now. This means, of course, that for some it qualifies as an ancient history book. For me it comes under the heading of undiscovered gem. As far as Duncan and I can tell it somehow slipped under MagicWeek’s radar and certainly dodged under mine. All this being so the following comments are for those unfortunates—in which group I count myself—who missed the book first time around.

If Lewis has a trademark style it’s the clever application (and thorough disguising) of mathematical principles; usually applied to cards. Lovers of the sort of material that exercises the brain rather than the digits will not be disappointed. You’ll definitely have some fun with this book. That said, the move makers among us are not neglected. And there’s variety here. It’s not all cards.

Some of the stuff requires little more than smooth handling whereas some oddments are borderline challenging. There are card moves certainly, but also coin tricks and a fair slice of rubber banditry. There’s even a book test dissertation. I’m not sure why I said “even,” after all why shouldn’t there be a book test? The Grey Elephant In Denmark gets an interesting dose of refurbishment, with Lewis (as usual) tackling some of the presentational problems inherent with maths-base magic.

Lewis offers some thoughts on the Any Card At Any Number plot and comes up with a very serviceable card effect. I think it qualifies more as a starting point for further thought rather than a strong entry in the ACAAN stakes. The performer handles the cards a bit too much for my liking and the thought-of card is actually removed from the pack after it’s been thought of. But, to repeat, it does stimulate the grey cells.

Grab It is a neat idea designed to outwit a certain kind of spectator. It culminates in an adaptation of the Steinmeyer Nine Card Problem. Ideal for awkward heckle-bent spectators when a simple smack-in-the-mouth isn’t appropriate.
By way of inducement to potential buyers, the back cover of the book carries some general quotes from a variety sources, all in praise of the work of Mister Jones. The following, from one of magic’s very dim and lesser lights caught my attention:

“Lewis Jones really does ponder his subject at length. In this respect I am reminded of Paul Curry and Stewart James ... His thoughtful and analytical approach is not at all out of place in such company.”

Apparently I wrote this in Abra, though the exact location escapes me and Lewis doesn’t identify it. I presume it was a review, but he doesn’t identify the work under discussion. This is something I’m rather glad about, because the statement fits everything of his that I’ve ever come across. And it certainly suits Magic Gourmet. But, probably what I like most about Lewis’s material is that it gets me thinking. This never was a pushover, but these days it’s much more of a challenge. Lewis Jones virtually demands it.

There is, of course, much more than can be even hinted at here and the book is worthy of in-depth investigation. If, like me, you missed it in its first trip round the block, try to check it out this time.