Tommy Cooper ‘Jus’ Like That!’ A Life In Jokes and Pictures
by John Fisher
Preface Publishing. Hardback, 96 pages
Reviewed by Roger Woods 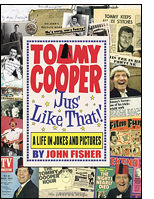 John Fisher must be regarded as the expert on the late comedy magician Tommy Cooper having written the definitive biography Tommy Cooper: Always Leave Them Laughing (Harper Collins, London 2006) and a number of compilations of his jokes and gags. This present volume is in a scrapbook style with an attractive A4 sized hardback presentation. The book contains photographs, memorabilia and documents from the author’s own collection, together with items from Tommy’s family and others, many of which have never been seen before.

Tommy’s biography is set out largely in a chronological fashion and the book is interspersed with many of his favourite jokes and gags. There are many colour images and items such as news clippings on every page.


It is fascinating to see Tommy’s original notes and scripts together with family photographs, theatre bills, contracts and the like. For example, the contract for his last television performance on the night of his death on stage shows that he was to receive £6,000 for one night, which is a goodly sum today never mind in 1984! It is hard to believe that it is nearly thirty years since Tommy left us, although repeats of his shows on television still continue to capture the public imagination.

There is so much to browse and enjoy in this volume and it represents excellent value for money. It would make a great Christmas present to anyone who remembers the antics of one of our greatest comedians.