Card Magic USA (ebook) compiled and edited by Peter Duffie.
More than 280 Pages featuring a mix of 80 moves, routines ideas, hints and tips and more.
Illustrated with photos and line drawings.
A collection of largely previously unpublished from more than umpteen (not quite 50, in fact) very active US card people. Plus a Bonus Section from some Past Masters.
Available as a download from Peter Duffie’s Alternative Magic. £19.00 Sterling, $29.95 US. 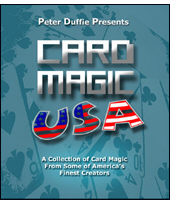 Well, what’s to say? Another card book? Yes indeed, I’m pleased to say. Peter Duffie has long been a producer of stylish card stuff, usually his own. In recent times he’s turned his hand to compiling and editing material from, well, all over the place really. Not all cards, this is reflected in such titles as England Up Close, Scotland Up Close, Mind Blasters, Miraculous Minds, to name not very many. If you’ve seen any of these, you’ll know the quality he produces; and you’ll want to dib in. Check out Peter’s website for a full list of the contributors; there’s too many to list here. Just a few of the big hitters, sampled at random are:

A blow by blow account of the routines is beyond the scope of this overview and would not be overly productive. Even it was possible, just reading a few effect-descriptions would prove overwhelming.

There are some moves, but it’s not all sleights. Bob King makes good use of a thick card in an ace cutting routine and Steve Dusheck offers an interesting take on the Svengali deck. Hardly cutting edge card wizardry, some might think, have a look and have a rethink. But if you do want a workout, try Stevens’ Aces, by Steve Ehlers. Less exhausting is a Michael Skinner ace production which makes subtle use of Vernon’s Cold Deck Cut.

Somewhere in between is an idea of Harry Lorayne’s, which is very good, as we might expect, but the real bonuses are descriptions of the Lorayne Spread Control and the Lorayne Force. Hardly new moves, but it’s surprising (or perhaps not) how many people aren’t familiar with them. Even folk with Harry’s books on their shelves. I’ve seen Ricky Jay use the Spread Control in the long ago (likely he still uses it) and according to Mister Lorayne (in Apocalypse) the move fooled John Scarne. He thought it was the Zingone Spread, which is something else altogether.

Suffice to say that Card Magic USA is a varied mix. I nearly said eclectic, but that’s a word that’s been flogged to death. But it would fit here! I like it, but then I like cards, which for some is proof of some sort brain-sickness. What do they know. Well done Peter. And well done to the US Cardmanics. Check it now, while you’re still logged on.