Blackpool Magicians’ Club, with Derek Lever at the helm, once again pulled off a spectacular success. Still packing them in after 62 years, this annual mega convention opened its doors to 3,600 registrants on Friday 21st February, with 130 or so dealers exhibiting their wares. While buying on line is increasingly becoming the norm, there is no substitute for actually seeing the products live, feeling the quality and watching unedited demonstrations, free of cutaways or carefully-selected camera angles. Judging by the constantly-packed aisles in the three dealer rooms, many magic enthusiasts are of that opinion. 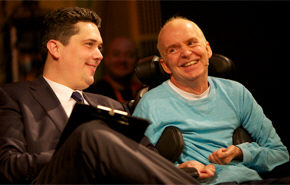 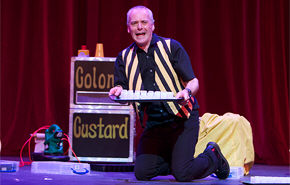 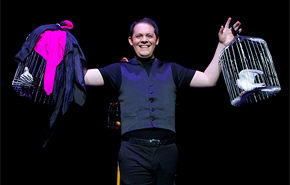 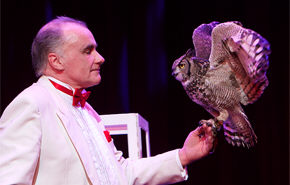 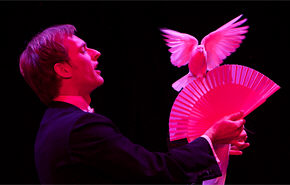 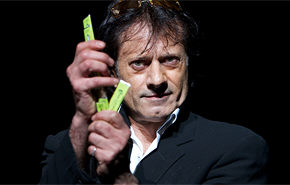 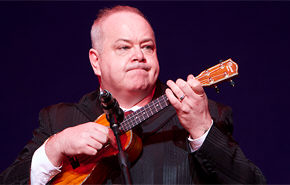 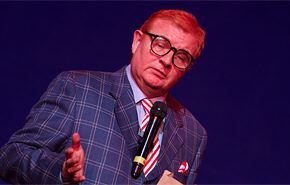 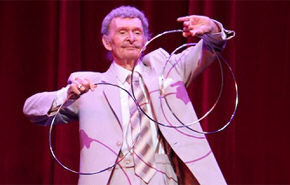 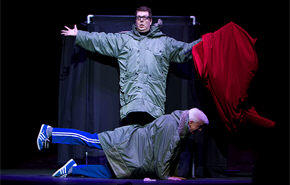 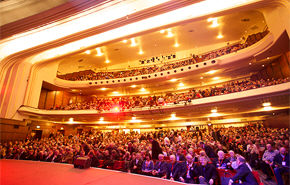 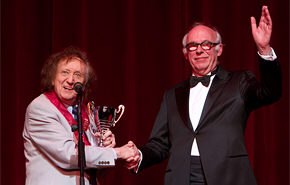 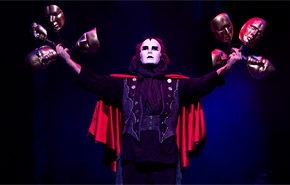 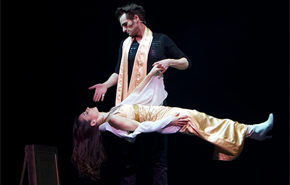 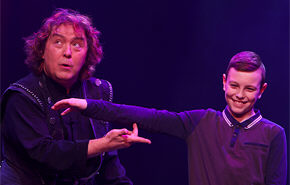 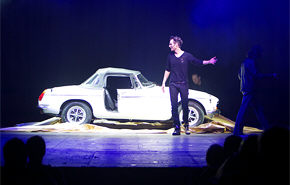 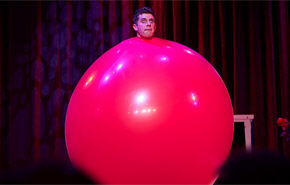 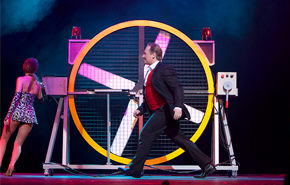 Boris Wild started the production-line of 21 star lectures – nearly all by legendary names - which took place over the next three days. Today’s programme included talks and demonstrations by Oscar Munoz, Mathieu Bich, Mel Mellers, Dan Garrett, Anson Lee, and John Archer. Ken Bowe’s exhibition of theatre posters, photos and memorabilia ran quietly in the background throughout the convention, and Robert Ormesher sat patiently in the lobby, ever ready to sketch caricatures of anybody who wished to sit for one.

The afternoon brought International Close-up Magic in the Pavilion Theatre. The large number attending meant that the vast majority had to watch on the big screen behind the performers, or via the half dozen or so monitors dotted around the Horseshoe which skirts the theatre. Quite a few commented on the irony of travelling to a convention, with all the expense that entails, simply to watch everything on screens; but getting close to the live action usually entailed bagging a seat at least 30 minutes beforehand.

The performers, introduced by David Plant were: Paul Gertner, Mark Elsdon, Patrick Redford, Tabary, Mark Shortland, Mathieu Bich, Oscar Munoz and Hayashi. One novelty highlight of the show was Paul Gertner performing with an iPad fastened in front of his face.

That evening brought the first of three International Gala Shows - the music for all of them being ably supplied by Dave Windle at the keyboards. This one was emceed by Mel Mellers whose charisma and comedy lifted a rather slow-moving first half. It seemed to drift a bit after being given a cracking start by Anson Lee’s skilful and well-presented, manipulation of colour-changing cards and balls. The other performers were Oscar Munoz, Dan Garrett and Patrick Redford. But this was very much a 'show of two halves'. Things livened up considerably after the interval, with Valerie’s quick changes, Mark Raffles’s losing battle with his Linking Rings, Amethyst’s fast-moving illusions and the show-stopping magical comedy and sight gags of Men in Coats.

Saturday saw lectures by Valerie, Henry Evans, Hayashi, Paul Gertner, Jay Sankey, Tabary, Jordan Gomez and Woody Aragon. But the big event of the morning, for many, was The British Children’s Entertainers National Championships taking place in the Opera House. Oscar Munoz emceed in fine style, smoothly and effortlessly filling the gaps between performers and entertaining the predominantly adult audience while at the same time keeping the interest of the small number of children, who occupied the first few rows.

Competitors were David Tomkins, Silly Scott, Mr Merlin & Okey Dokey the Dragon, Brian Daley, Magic George and Colonel Custard. The general standard was high, and unlike some previous years, each performer had a distinctive working style that was completely different from those of fellow competitors. So there was none of the he’s-only-doing-the-same-sort-of-things-as-all-the-others feeling that has often dogged this event in the past. The winners, decided by audience vote (i.e. mostly fellow magicians) were, in descending order, Colonel Custard, Silly Scott and Brian Daley.

The Wayne Dobson and Friends show which followed in the Pavilion Theatre is now so popular that it has almost outgrown the venue, which was packed to standing-room-only capacity. As usual, Michael J. Fitch hosted and played straight man to Wayne’s quips and interjections. Wayne started with his impression of Stephen Hawking, thereby setting the tone of the show! Then Jeff McBride gave us his of Wayne and later returned with a version of the Benson Bowl plus squeaky sponge balls. Others appearing were Ian Rowland with a mental effect and George Kovari Junior escaping first from stocks and then a strait-jacket with muzzle attachment. But the real joy of this show is the concert-party atmosphere, as the various performers join forces to participate in the gags and fun.

Later in the afternoon came Magical Speed Dating under the auspices of Harry Robson. With seven tables around the room, the performers passed from one to another, spending ten minutes at each. The idea was for them to answer questions rather than explain tricks. This caused a few problems for the ones with less-strong voices, who were almost inaudible over the cacophony of background noise. John Archer coped well and managed to make himself heard by everyone, while Daryl, at my table, did not project beyond the first couple of rows. The performers who fared best were those like Jay Sankey, who disregarded the ‘no tricks’ injunction and simply showed and told. The others doing the rounds were Dan Garrett, Hayashi, Shoot Ogawa and Woody Aragon.

The International Gala Show that evening was emceed by John Archer and was, in many ways the best of the three. It also contained what must have been the most talked-about performer of the entire convention, Paul Derek. This looked like one of those acts that all too often crop up in magic competitions, where the performer’s general ineptitude provokes much derision. Here the audience were hooting with mirth at a complete shambles of an act, which was funny for all the wrong reasons. However, I am reliably informed by two people whose opinions I respect, that this is a busy performer, who deliberately feigns incompetence. However, I felt that the audience were laughing at him rather than with him (especially those who began slow handclapping halfway through), and when about a third of them rose to give him a standing ovation at the finish, it seemed more ironic mockery to me than appreciation. But Derek Lever tells me I have it all wrong, saying that he knew exactly what to expect. The act, which plays cruise ships and tours with Ken Dodd, did just what he was booked to do.

However, all this came later. The opener was Jupiter, who seems to turn up in some show or other at Blackpool almost every year. He was followed by the stylish manipulations of Erwan Bodiou whose bird productions not only include doves, but also canaries in cages and a large duck. Hayashi assisted by two young men, all in Japanese Samurai costumes, demonstrated his swordsmanship and martial arts skills in a way which must have struck fear into the heart of every cucumber within a ten-mile radius.

Tabary demonstrated how a true showman can entertain with just a few bits of rope. Oliver Tabor performed his signature magical violinist act. Rocco worked with sweets, biscuits and peanuts, forsaking the stage to stand under a single spotlight on the floor of the auditorium.

Finally Guy Barrett assisted by three girls replaced the billed Ali Cook with a series of high-speed illusions, including a highly spectacular girl through revolving fan, ending the show on a high note.

The final event of the day was Beat the Wand presented by Magic Sam and Andrew James. For many, this is one of the highlights of the convention, providing a bawdy shop window for new talent, often featuring material that would be deemed unsuitable for the more formal shows.

Shoot Ogawa’s later star lecture was cut short to make way for the show which followed, so turned into more of a dealer dem. as he had insufficient time to go through the workings of much of what he showed. Nor was he helped by a man whom we were told to call Charlie, who was introduced as his mentor. Throughout the lecture this individual’s restless fidgeting distracted attention and upstaged his ‘student’.

The Four F’s Stars of Close-up Magic which followed the Ogawa lecture was emceed jointly by Obie O’Brien and Joan Caesar. The performers were Rick Merrill, Jay Sankey, Woody Aragon (whose variation of the John Scarne and/or Bill Simon Call To The Colors, using red and blue backed cards was, for me, the highlight of the show), Daryl, Boris Wild, Henry Evans, Rocco, Dan Garrett and Shoot Ogawa (whose Cup & Ball routine using components of a cocktail shaker was another high spot).

For that evening’s International Gala Show the compère was Liverpool comedian John Martin, whose comedy, based much on topicality and current news events, makes him ideal for the job. Although, I would imagine even he heaved a sigh of relief when the curtain finally descended on a four-and-a half-hour marathon.

The opener was Jordan Gomez with his smooth CD manipulations. The Supertells followed (Peter & Sonja Moretti) with an updated version of the spectacular crossbow act made famous nearly four decades ago by Hans & Helga Moretti. Later they were to return with the legendary sword-box act.

Mel Mellers’s sly digs can always be relied on to get an audience rocking with laughter and tonight was no exception, while the antics of Clive Webb, Danny Adams & Co. raised the roof. However, several people commented on the wisdom of allocating them two spots in such a long show. Both were hilarious, but perhaps it would have paid to keep one back for some other time. Claudius Specht, Swiss juggler, whose remote-controlled table moves around, shooting clubs at him whenever and wherever he needs them, enabling him to get as many as eight up at once, garnered huge applause. Graham Jolley was good and got off to a great finish with his Magic Square, but I have seen him register much stronger on other occasions.

Jeff McBride has such a reputation that he would have to be really bad for a magical audience not to like him. On this occasion he was at his best. So even given the lateness of hour, he scored very heavily, helped by the antics of the boy who assisted with Miser’s Dream. Demonstrating how an experienced performer is not afraid to give the helper his head, knowing he is contributing to the overall success of the act.

I felt a lot of sympathy for illusionists Julius Frack & Cindy who not only had to follow such a strong performer, but to do so with an audience, most of whose appetite for magic had been more than surfeited and were ready to leave. However, their final production of a sports car was amazing and drew a lot of gasps, even at this late hour.

As is customary in the middle of the show, various accolades were presented. President Russell Brown handed out prizes for the previous day’s Children’s Entertainer winners. The Murray Award for outstanding service to the art of magic went to Obie O'Brien and a Lifetime Achievement Award to Joan Caesar. Ken Dodd presented his Comedy Cup to Graham Jolley, the Neville King Trophy to Arthur Casson, and did a short spot of gags (yes, you read that correctly – a short spot!).

Then came the After Show Party where Karl K introduced cabaret by Brian Sefton, Patrick Redford and Mark Shortland.