Once again, it was an incredible Blackpool convention. Here are a few of my personal highlights… 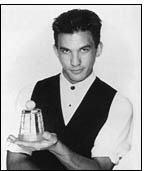 One of the many reasons for keenly awaiting the convention was the chance to see Jason Latimer who, following his FISM Grand Prix Close-up success, had sent out a wave of anticipation regarding his 'glass cups' and balls. Aside from a single photo which was reproduced in the program, I had never seen nor previously heard of him.

Prior to his performance in the close-up session, he briefly appeared at the door to take a look around. The immediate impression was that he looked every bit a top magician and I knew that I was not going to be disappointed. He was announced and finally emerged. He exuded confidence and, with not a hint of cockiness, I felt an immediate liking for him. His face and genuine smile were very friendly and as you looked him up and down, his clothes, his deportment, his overall charisma couldn't help but make you feel "this guy is going to be good" before he even lifted a finger. To be honest, his act would have to be pretty dire to lose what he had already gained and he could have made any competent act seem worth watching.

He sat down to perform but wasn't diminished. He reached everyone. I actually watched Jason's act no less than five times, with ever swelling numbers watching him. I also stood at a number of different positions. Not once did I not feel at least once that he had made personal contact with me for a brief moment. He is an almost perfect close-up magician and doesn't really need a particularly great act.

The act itself is over ten minutes long and is essentially a three cup, two load routine. Far too long for such a routine.. usually!! In this case, it simply wasn't, further confirmed by the fact that I watched it a number of times in straight succession. It is technically flawless, superbly choreographed and, despite being based on one of the most common of close-up tricks, original. It is sufficiently ahead of the game that some of the sequences draw gasps and, even on the fifth viewing, spontaneous applause and this is from someone who regularly works cups and balls!

I am very excited about Jason Latimer for two reasons. Firstly, because he fooled me badly. In fact, on the first viewing, which is the only one that really counts, he destroyed me. Secondly, because in the past few months, I have seen for the first time Armando Lucero, Takamitsu Uchida and Jason Latimer who have between them produced the best magic I have ever seen in my life which gives me great hope for magic. 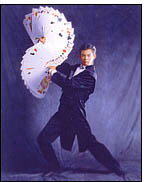 Takamitsu Uchida is a former FISM World Champion of Manipulation and another of the acts I was very keen to see.

Having produced a number of split fans and single cards, it has become the norm with top card manipulators to advance the act into ‘new wave' card productions that seem to demonstrate that cards could not be backpalmed with a few very showy displays that go well beyond the standard ‘show-the-front-of-the-hand-show-the-back-of-the-hand’ manoeuvre.

Takamitsu started beyond where most others end with some stunning productions and, as has become a Japanese trend, card spinning in conjunction with body movement to produce a three dimensional pattern of cards around them. Sadly, the lighting was very poor for this sequence with apparently, the main spot light missing. If you walked in at this point, you would be forgiven for thinking that you had just walked in on a grand finale. My thoughts at this point were that either, the act was going to have great difficulty in maintaining the technical level with little in the way of crescendo, or, it was going to be a very short act. I need not have worried! What followed was going to blow me away.

He soon progressed onto Jumbo cards with some sequences that seemed to set out to prove that it is possible to reproduce using pure sleight-of-hand, the Jumbo card fake that many manipulators use to finish with. A number of pure card circles were produced but it didn’t stop there. He proceeded to perform an act that would grace any standard card act using jumbo cards including double-hand productions with fan and single card productions. As though this was not enough, he went on to produce giant cards (four times the size of jumbo cards) and it suddenly dawned on me that the picture in the convention brochure that showed him with a giant 'S' was not a posed publicity picture but could have in fact, been a still from his act.

Well beyond where you think he could take this crazy venture, he went on to produce ten or so individual giant cards that looked absolutely perfect before his final production that was about half the size he was. Don't ask me, I haven’t got a clue!? 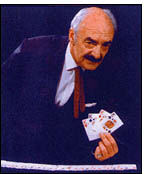 It was fantastic to see Rene Levand’s act again because it is one of the all time classics up there with the likes of Al Goshman’s salt shaker act. Though I have seen it before, I would take any opportunity to do so again because it is magic history. Call me sad but I even picked up one of his ‘crumbs’ to keep in my magic den.

His hallmark trick is, by today’s standards, an undemanding ‘two-in-the-hand-one-in-the-pocket’ routine. The true value of seeing him therefore, is to realise what it is that makes him a true, and deserved, International legend of magic. Forget the techie bits and handling and look not at what he does but how he does it. I followed a youngster out of the hall who was conferring with his mate saying “that trick with the crumbs and a cup was easy, I could do that”. No my friend - you completely missed the point!!!

Having said all of that, the best technical advance I got from the whole convention was his nullification after he has allowed a spectator to riffle shuffle the cards which he didn’t do last time I saw him and I have never seen before.


With a cursory look down the list of competitors, I knew a number of them but was not familiar with Feco’. It turned out to be none other than Ferenc Galambos from Hungary who came third at FISM last year and walked away with second prize at the International Close-up competition at McMillan’s weekend. Strangely, every time I have seen him perform, he has experienced technical difficulty with getting his music started. To some extent, it could be considered his own fault because a close-up act should, almost by definition, be self-contained and if music is needed, it should be built into the special table he uses anyway. That said, in fairness, he does not speak English so it is fair and fitting that he should perform an act to music.

The act is a classy street act with a quite superb cups and balls routine with balls assembling both under and in-between the cups. This was followed by a very pretty Ace assembly with blank cards (bar the Aces), an open handed (no cards) coin matrix and the ‘fisherman’s pearls’ routine. It is excellently put together and elegantly playing in perfect time to the music which, with the possible exception of ‘seventy-seven sunset strip’, is well suited.

It must have been a very simple job for the judges to award first place because the act stormed it and attracted a response that dwarfed the other acts. The person sat next to me asked after the last act “who do you think will come second?”. First place was beyond question.

I don’t have a problem with the result. Judging the competition as presented, it would not have been possible to pick another winner. What I found myself having a problem with is “what the hell was he doing in the BRITISH magical close-up championships in the first place?". There are many excellent British close-up acts but the competition generally invites a number of everyday working magicians to enter, I have even been in it myself. So why, for the first time, bring in an established International magician of a different class to romp away with it?