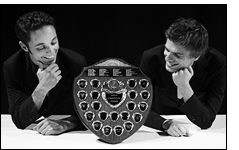 The 75th Annual Convention of the IBM British Ring welcomed nearly 500 delegates to the mild and sunny climate of Southport at the end of last month to enjoy 4 days of excellent lectures, shows, competitions and dealers.

The event was one day less than the generally known format and started by a welcome from the Mayor on Thursday afternoon (22nd). His witty speech paved the way for a most enjoyable few days to come. The opening show, compered by Pat Fallon who was jovial as ever. He introduced Mandy Fletcher (who went on to be a prize winner with her team in the stage competition – more later) with the act as known, very well received just as it was at the President’s Dinner earlier this year. Chris De Rosa was a new name to me in the illusion field and had again some effects new to me. Mark James was FUNNY big time as he always is and a welcome addition to the show. This afternoon entertainment is always a short show but puts conventioneers in the mood for what was to come. It was now time for the 25 exhibitors to open in the dealers’ hall and I trust they all had a successful few days trading. Practical Magic won the Dealers’ Trophy for the best display.

I did not see all the lectures due to PRO duties but heard they were all good and British Ring members will be able to read individual reports in forthcoming editions of the Budget. I think this is the fairest way to deal with this at the moment as I would feel uncomfortable reporting some whilst leaving others. I hope you the reader will agree here. The first lecture was by Mark James.

In the evening of Thursday following the Ali Bongo Micro Marathon (won by Bharat Patel) it was Cabaret Night. Italy’s Vittorio Marino was a most unusual compere and very talented. One moment he was on stilts, then a Toulouse Lautrec style character and even riding a pantomime creation. You wondered what he would appear as next! I hope we see more of his style soon. Wes Zahruk a Canadian magician/zany magician was certainly different. Amongst other things he demonstrated how to vanish a silk up the sleeve - by putting a vacuum cleaner nozzle in at the shoulder end and switching it on! That was only the start. Something we are not so used to over here but you can’t ignore him!

Sonny Pennington a sophisticated young man and took a prize at the recent TMC YMOTY competition was well received for his flawless performance. The act of Safire as known is always a joy to watch and this was another occasion to see an act that tours so much an has been greatly associated with the Chuckle Brothers for many years now.

After the AGM on Friday morning brought the dealers showcase organised by Jim Boyd and introduced by Alec Powell. This event was followed by a lecture by Mel Mellers and then the close up competition. The winner was Matthew Wright, second Michael Neto, and third Paul Ingram. Marcus Taylor was awarded the Rovi trophy for card magic.

The Friday evening Gala Dinner held in the Lakeside Suite Where President Keith and his lady Pam welcomed the International President Vanni Pulé and his lady Mary Anne together with 110 British Ring members and guests. Speeches were by the Mayor, Keith and Vanni. All done with wit and good humour and relatively short in length as is the norm these days. For those not attending the dinner, Bob Hamilton gave a video presentation of clips from previous conventions.

The Late Gala of Magic was compered by Michael Carr (another success story from the President’s Dinner at Tillington Hall). He introduced the hilariously funny Mel Mellers, the almost totally different juggling skills of Mat Ricardo, the young Frenchman Jordan Gomez with brilliant manipulation skills all performed in a very modern manner. Finally, the well known illusions of Amethyst including walking through steel completed the entertainment.

Saturday, for those not attending the Shawn Farquhar lecture there was the children’s show. This also to a degree clashed with the Anthony Darkstone Talk Show which I also missed due to reporting the Sooty and friends as below.

Clowns, Clivo and Jeani (Clive Moore and Jean Ellison) are clearly very much at home producing this annual event, always with a good variety of acts. Let’s therefore recall what we saw. Opening was Paul Joyce who I have seen twice before and he clearly is certainly going places. His opening with a noise meter which the children ‘broke’ certainly established him with the youngsters. It was then on with Sucker Beaker Vanish, Do As I do Balloon Penetration with a child (very funny routine) who then enjoyed a ride on the flying carpet. All good stuff and I look forward to following his career as a children’s entertainer.

David Tomkins is very well known to the magical fraternity especially to those who follow his articles in The Magic Circular. He had a new twist with the Die Box using a Rubic Cube and the box had six doors – now work that one out! On then with Bongo’s Hat and Loopy Loops. There was the stiff rope with an Indian Rope Trick Story accompanied by a very striking vent dragon. Adding that extra something to your magic is always well received. Well done David.

Safire’s Black Light Puppets stand alone on any stage. They are amazingly colourful, fast, funny, exciting and expertly operated. You could not ask for anything more, other time to catch your breath so it was a good time for an ice cream.

A welcome return to the IBM British Ring Convention was Richard Cadell and all the mayhem Sooty and Co bring to the stage. The interaction, slapstick and speed of operation are just as good as I remember it 60 years ago (not with Richard though!). This timeless creation is, I am sure worthy of at least another 60 years of life. Thank you Richard and all your team – and the water pistol, Sooty!

The illusions of Safire are always a delight to watch and Stuart’s zany approach to presentation does, I feel set them apart from other illusionists. That coupledwith Jayne’s vibrant action adds to this most successful magical duo. There was Head Off, Legs Off and an amazingly fast Sub Trunk.

A good show greatly enjoyed by young and old alike and I look forward to the magical mixture Clive and Jean come up with for Yarmouth next year.

Saturday afternoon brought Eddie Dawes introducing More History of Mystery. This was a fascinating insight into three completely different topics 1) The Tragic Deaths of Lafayette: The most hated magician who ever lived presented by Brian Lead 2) A glimpse of the David Devant collection of photographs from The Magic Circle Archive presented by David Hibberd. 3) Secrets of the Side Shows presented by Jon Marshall (photo). All these presentations were via Powerpoint with excellent commentaries.

There was also a lecture from Joe M. Turner later on in the afternoon.

Saturday evening brought the British Ring Shield Competition where 10 entrants battled it out for this most coveted prize. The winner was Ta Na Manga of Portugal (photo) with a most unusual narrative act. Runner up was in the hands of Elemental from North Wales who also took the prize for manipulation. Third prize went to Ianthe of Glasgow featuring Mandy Fletcher and assistants presenting mainly fast moving illusions set to high energy dance. The originality trophy went to Tim Shoesmith of Hertfordshire.

On Sunday morning there was the Jeffery Atkins Memorial Lecture this year presented by Michael Finney.

The Gala Show on Saturday night played to a nearly packed house and compered by the most versatile entertainer Aonghus McAnally from Ireland. Rafael and Jenny from Belguim presented two spots, one as the show opener and later in a protean entertainer, very fast changes ending with them both as a wedding day couple.

Romany presented her burlesque magic as known coupled with the rope tie recently aired on the Penn and Teller: Fool Us TV show.

Jason Andrews was slick, smart and a perfect example of presenting classical magic at its’ very best.

Shawn Farquhar (another from the Fool Us TV Show) was highly entertaining including Topsy Turvey Bottle with a number of interesting twists. A great act to watch from a man who is as welcoming both on and off stage.

Michael Finney was as brilliant as ever with his one liners, so whatever you do never even think of heckling him. He has an answer for everything. All he needs is a piece of rope and a pack of cards and you are always in for a real magical treat.

Guy Barrett presented illusions as known, filling the stage with excellent props enhanced by his own lighting panels and his team of female assistants turning the tables on him as they put him in one of the illusions much to the amusement of the audience.

Another convention over and it’s time to start planning the next one from 26th to 30th September 2012 in Great Yarmouth. Keep an eye on the British Ring website www.britishring.org.uk or www.magicconvention.co.uk for details as they become available. Our newly installed president Brian Miller looks forward to seeing many of you there. President elect is now John ‘Sly’ Smith, Secretary John Pye, and Treasurer Keith Cooper.

Finally, on behalf of all conventioneers I would like to express a vote of thanks to John Pye who has organised this event for the last 8 years. John is stepping down from the role as next year he takes office at the International President of The International Brotherhood of Magicians following in the footsteps of current President Vanni Pulé of Malta. The 2012 British Ring Convention is being organised jointly by David Ball and Peter Scarlett.