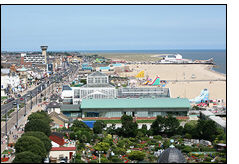 The IBM British Ring convention in Great Yarmouth was a very successful few days of Magic with approaching 500 attending this get together amid the Norfolk sunshine. Whilst some may have had reservations about it not being an all under one roof convention the novelty of free transport on the “Dotto” trains running regularly along the promenade more than made up for it although, the distances were not excessive anyway. Many reported enjoying the short seafront walk in such lovely improved surroundings as very refreshing without using the trains, so everyone was happy.

There have been a few changes from previous years which, all in all seemed to have been welcomed. For instance the registration area, dealers’ hall, dealers’ demonstration theatre and refreshment facilities being very much in one area has been favourably commented on by many, so for starters it’s probably one to consider keeping for the future.

The lectures and workshops were all well attended and received and the competitions had interesting acts with a number of awards being presented. Winner of the Close-up was Vadim with in 2nd place Fay Presto and 3rd Will Gray. The Rovi Trophy for skill with playing cards went to Alex Hansford. In the stage competition the Theo Speaker Cup and £500 went to Sean Alexander – The Confusionist. The Dittia Shield for manipulation went to Dave Andrews together with £250. The Craig Trophy for best dealers’ display went to Astra Magic. A special award this year went to Steve Evans in the form of “Compere of the Year Trophy”. Fay Presto also won the Micro Marathon Competition.

The tribute to the Van Buren Family was both a very interesting nostalgic through to current life presentation featuring video clips and live illusion performance narrating the story about this greatly loved magical family.

The convention Gala Dinner was one of the best I have attended with short and witty speeches by President Brian Miller, International President John Pye and the Worshipful Mayor of Great Yarmouth Councillor Colleen Walker. The Masonic Centre is a lovely venue, the meal excellent and served with the most professional and courteous staff. Nothing was too much trouble and it was a treat to be there. I was delighted to see amongst the diners the Immediate Past President Vanni Pulé and his lady Mary Anne and The Rt.Hon. Lord McGregor of Pulham Market PC OBE supporting us.

Our open performances on Saturday, Sooty’s Magic Show and the Gala Show proved to be excellent ambassadors of magic not just in our own eyes but in those of the public too. Both attracted good attendances.

On the Sunday after the service, lecture, stars of the future and the Paul Daniels Q & A session John ‘Sly’ Smith was installed as the President and looks forward to meeting many of you during the next year.

The organisers should be congratulated in bringing to the south east coast a well thought out convention which seems to have been enjoyed by one and all.

Next year the convention will be held in Buxton (Derbyshire) from the 4th to 8th September, the headquarters hotel is the Palace and it’s nearly all of it is under one roof. There were 50 registrations for the 2013 convention taken at Great Yarmouth. Further details will be released as information becomes available.