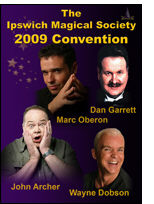 It was a sunny and warm day as a number of conventioneers made their way to the seaside town of Felixstowe and a brand new venue for this convention, The Spa Pavilion Theatre and what a great venue it was, with a superb theatre to house the lectures and evening show with the rest of the complex being perfectly adequate to house the dealers. Bar facilities and catering were excellent (you should of seen the size of the portions of fish and chips! and at a very reasonable price).

The day opened with the official opening followed by the absolutely superb close-up act of Marc Oberon. After a short break came the John Archer lecture with demonstrations and explanations of some of the material from his best selling DVD. Next came the Dan Garrett Lecture which I unfortunately missed but from the comments heard afterwards was entertaining and informative.

The afternoon session got off to a brilliant start with An Audience with Wayne Dobson which was presented by Michael J Fitch and featured many old TV clips of Wayne in action and some classic comedy moments with comments from Wayne along the way - this was an excellent presentation and praise must go to Michael for compiling all the TV clips into a very entertaining format. The afternoon session finished with Marc Oberon’s lecture which the many who have seen it will agree, is a masterclass in the style and technique of classic magic.

In between lectures there was plenty of time to catch up with friends and visit the dealers who included Barries Magic, Magic TAO, Magic Books by Post, Magic Attic, Albion Magic and DTRIK Magic.

The evening show commenced at 7.30pm and was open to the general public and from where I was sitting it looked like a really good house. This is a superb theatre from an audience point of view and from a performers (I had the pleasure of working it with the late Bob Monkhouse). The show opened in traditional style with the Suzy Lowe Dancers followed closely by John Archer who compered the show in his own inimitable style often having the audience helpless with laughter with his own particular brand of comedy. The first half included Marc Oberon’s superb cabaret act plus the zany humour and madcap magic of Alec Powell. The second half opened with the dancers followed by the mind reading and razor sharp wit of Graham P. Jolley. Michael J. Fitch shone with a delightful piece of audience participation and finished with an illusion featuring his delightful wife, Helen. John Archer performed his blindfold routine with all the ‘bits of business’ that are pure John Archer.

The show closed in fine style with Marc Oberon’s sensational UV act which has to be seen to be believed.

All in all, an excellent convention and I feel sure everybody went home feeling that they had a really great day, so congratulations to Simon Shaw and his team on a job well done.