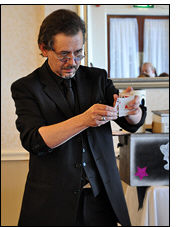 Organised by Stevie B and well arranged to fall on Sunday May 8th in the same venue as the previous night’s Presidential dinner.
There was a reasonable turn out of members although it was disappointing there weren’t more who had made the journey or decided to stay on after the presidential dinner from the previous night. For those who had made the effort, it was proved to be a very wise choice. It was free to all Northern Magic Circle members and only £5 to non members and it proved to be a bargain.

Opened at 11am, there were four dealer stands selling their wares, one being Cynthia working as hard as ever overseeing sales on the Juniors stand, all proceeds going to the Junior section. Most of the props I believe have been donated by members in the past an there really were some bargains to be had, well worth a look if you get a chance, you may get a bargain whilst knowing you are supporting the juniors as well.

Stevie B opened proceedings by telling us the timetable for the day and also telling us about his trip to Poundland and what you could get from there. If you want to know what it was you should have gone to the session! We then went into a trick session where Stevie explained the mechanics of how it worked and then gave us all the chance to work at it and make our own versions. We even got to take it home! After a few trials with the product, we all got to grips with it and it was a very clever principle – again, if you want to know more you should have been there!

We then went into the first talk of the day and that was by Ray Roberts and was about the life & times of Horace Goldin. Hearing about his Jewish ghetto beginnings and how he started to develop into the magician we had all heard about was fascinating. It was a really good talk and enjoyed by all. I think special mention must go to Ray, he presented his talk in a most entertaining way, starting with mutilated umbrella to cane to begin and to finish, I thought his effect was a real showstopper and presented superbly.

We then had a break for lunch, with plenty of teaching of tricks going on, Baggy taught a great card trick to my son Jonathan who has done it none stop ever since! The two best tips of the day came from a junior who said he keeps his playing cards in the fridge and for misdirection shout Moose! He also showed great skill with an ace production which he then very kindly taught us all.

After lunch it was straight into Shaun McCree’s lecture (photo) which due to the set up of the room he was able to firstly perform as if in table hopping mode. From there he talked us through the mechanics of the routines and what has brought him to do things the way he does. I have seen Shaun perform many times and also lecture and he just gets better and better, you can always tell when you are seeing a real worker in action and in my mind he is one of the best. Every routine is commercial and with the experiences he shares with you, it can only help with your own magic. Superb lecture and if you get the chance to go and see it I strongly recommend that you do.

Then it was on to the raffle and afterwards our President thanked us all for coming and closed the session. It really was a great day as those who went will testify, it’s not often in life these days you get something for nothing and it is great that the Northern Magic Circle are trying to organise events for their members. Please support the next one in your area – you won’t regret it.