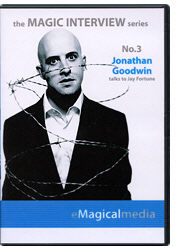 One could argue that Jonathan Goodwin single-handedly reinvented the tired and often contrived art of the escapologist with his ground-breaking one-off television show The 7 Most Stupid Things to Escape From that was shown three years ago.

For me the show worked on just about every level. It was genuinely funny, the escape stunts very real, the subdued madness quite apparent, the tension palpable. The dead-pan approach (and the involvement of Jonathan's Dad!) being the perfect antidote to the over-hyped nonsense we often connect with more traditional escapology presentations. It was Jackass with brains.

So I was more than happy to have been sent this just-published 2 disc audio CD set in which Jonathan talks freely to Jay Fortune about his whole approach to escapology, magic and performing.

Here's what's on the discs:


Part One: The Early Goodwin
Creative control, trick construction and inspiration for new effects
Is the magician really an actor playing the part of a magician? The difference between acting and performing
How he got his break into TV
Jonathan’s work with Derren Brown
Behind the scenes of Monkey Magic including the original line-up
Problems with magic; competitions, props and magicians
Knowing who you are and what magic suits you
Magic for television; shooting magic effectively
How to make your magic memorable
Producing Undercover Magic and The Secret World of Magic
His philosophy on escapology; jeopardy, traditional escapes, performance and flaws


Part Two: The Escaping Goodwin
Traumatic entertainment = compulsive viewing
His Dad and his role in Jonathan’s escapes
How do you make a cow a restraint?
Inspiration for his escapes
Toleration of pain
The real story of what went wrong on Death-Wish Live
The flawed plot of Russian Roulette
His meticulous research, planning and preparation

Part Three: The Philosophical Goodwin
The ‘90% of Magicians are A**holes’ Theory
Originality of performance
Why magic attracts a certain type of individual; a geeky boy’s hobby

Part Four: The Gaffa-Taped Goodwin
Jonathan puts his reputation and fee on the air. A live escape in the Radio Magic studio.

As I was listening to these discs I started to scribble down notes for this short review... but looking now see that I didn't make too many. In fact the only words I underlined were "Starbucks" and "baths" (not too helpful to me right now but he does like both, a lot).

Really what happened was that there was so much going on, on this two CD set, that there was little time to take any proper notes. Jonathan's thinking out of the (locked) box I found very refreshing and stimulating. He has an opinion on just about everything from magicians that use silks (ouch!) to the anti-climatic (as he sees it) inevitability of every Russian Roulette presentation. And this is what makes this such a captivating 90 minutes. It doesn't matter whether you agree or disagree with what he says, it'll get your grey matter going. I found myself agreeing with most, but am glad that his exploits with a dead cow never made it onto my TV screen!

If you are into escapology then these discs are essential listening. That really should be emphasised. ESSENTIAL.

If you are into performance then, again, I'd highly recommend them.

But if the immortal words "pick a card" are music to your ears then these discs may not be for you.