DVD Over two hours including main feature, plus extras: Fred's Fairground and People, Places and Posters 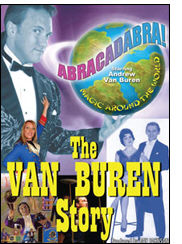 Within days of its release many were admitting this DVD had caught them out. It caught me out too. I fell into the same trap! It's long - over two hours - and sensible people like me settled down to watch just the first half hour or so only to find two hours later they were still there, totally absorbed by this wide ranging and very personal showbusiness account of the development of the Van Buren Organisation.

Television actor and comedian Roy Hudd OBE provides the opening spot and other well known names contribute because the name Van Buren is known throughout the world of circus, theatre and showbusiness as disciplined, dependable people whose show works literally anywhere and under any conditions.

It tells the story of the Van Buren Organisation, one of the UKs major illusion companies who tour the world with their illusion spectacular. These are the people Walt Disney met and engaged to create and present the magical sequences in one of his major European productions. A fascinating story of a family held in high regard by the business who are perhaps better known among Showmen than magicians. It’s a very well produced DVD with some rare archive film together with plenty of up-to-date excerpts from the Van Buren Illusion Spectaculars.

It is also a very intimate and personal presentation. You feel you are at home with the Van Burens and they are talking quietly and privately, just to you. Quite a contrast with their business where they are powerful Showmen - and Showwomen - whose showmanship and presentation brings excitement to audiences the world over. Most showbusiness stories are retrospectives of shows which once were but are now gone for ever. This is different. The Van Buren Story is about a show of the here and now and it’s a forward looking show, flexible and diverse meeting the challenges of today just as it did originally when Fred first established the act from which the Van Buren Organisation developed. This is a show of the future.

Don’t expect to learn how to do magic tricks. It’s not that sort of DVD. But watch, listen and you’ll learn as it takes you backstage and demonstrates how a large illusion show is created and travels and performs under almost any conditions, indoors and out, across the world. If you have ever wondered about the logistics of moving a big show from venue to venue, at home and abroad, sometimes in extremely adverse weather conditions, then sit back and listen to Fred, Connie and Andrew telling the tales. Then you’ll appreciate how quickly a couple of hours can pass! I should know - I've done it twice now! It's addictive!!

Most DVD players and computers will handle this DVD world wide in just the same way we in Europe can play the American format on a lot of the new DVD players. Price £14.99 including p&p Payment either by cheque payable to A Yoxall at Van Buren DVD, PO Box 777, Stoke on Trent Staffordshire, ST4 8QA England UK or by credit card to www.filmarchive.org.uk/staffordshire-dvds/van-buren.htm