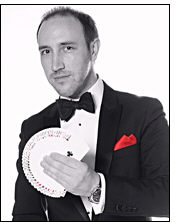 On this evening the St George’s hotel in Great Yarmouth was transformed, with the help of two talented gentlemen Olly and Sam Lane into an intimate theatre of magic. Bryan Clark was the guest compere for the event and set the fun and friendly tone ready for the first act. This being a magic competition the acts were chosen at random and I, Steve Majes, was on first. I presented a Uri Geller style revelation of a freely chosen card where the volunteers thoughts bent a forks prongs into the cards value and suit, I followed this with a phone call to the magician’s hotline in my presentation of a levitation using a cardboard box, the audience reactions were great and I knew this was going to be a fun night.


Robert Rathbone took to the stage next with a historical tribute first to the cups and balls, a classic combination of moves made for a magical routine. The tribute continued with respect to Houdini, parts of Houdini coin made a magical escape and appeared within a pack of cards held by a spectator.


Edd Crafer entered the stage full of energy and with quick witted patter and clever slights entertained with a jumping knot from a white rope, in which it remained white, and jumped to a red rope. A signed and borrowed £10 was transformed magically at fingertips to a £50 then, at the disappointment of the volunteer, back again. Along the way Edd had two chosen cards combine into one, a very romantic bending stem of a glass routine and finished with a flash production of a bottle of bubbly for the couple involved.


Joshua Pickering straight away involved the children from the audience with a fun magical gag and then brought the adults on board his world of fun with a signed card found using slight of tongue. Josh had a lot of fun interactions with the crowd and finished his performance by being manhandled into a straight jacket with the help of a very strong audience volunteer, with a very unique timer and lots of laughs along the way Josh made his escape before his time ran out.


Jake Ace showed off his slight of hand skills with poker chip productions and vanishes and perplexed a volunteer by having the chip appear on their shoulder and the back of their own hand, a borrowed signed coin was then held victim to Jake’s skills and vanished that’s how he makes his money! Two cards were selected by an audience member with medallions randomly placed upon them, Jake had foreseen this with a prediction revealed to be correct that had been held by a volunteer. As a finale the coin that Jake had vanished earlier was discovered in a nest of brass boxes. This brought an end to the first half of the competition as the audience were treated to a buffet laid on by ‘The Gathering’.


The second half started with Jack Brister a very talented card magician. Jack’s first set of magical skills had a chosen signed card travel unseen to various pockets on his person each time under tougher conditions with eventually the whole pack traveling to his pocket. To make this feat even more amazing Jack did an encore with five signed cards traveling to different pockets and his wallet. Jack finished his set with an unique effect he created where a thought of card turns up reversed in a pack of blue backed cards held by that spectator, not only that the back of the thought of card turns out to be red and the rest of the pack is revealed to be blank.


David Wrighting presented a plethora of magical stunts and effects as a tribute to Houdini, starting with a magical coincidence of the magician and spectator selecting the same card from two different packs and then a signed chosen card was then spiritually found reversed and burnt in the pack. A Makibishi (sharp spiked object) was used next in the classic “Smash and Stab” plot, glad to say David came out unhurt. Archery featured next, David was blindfolded and spun around and with bow in hand and with much ducking from the audience he found and hit the target. To finish the act, escapology played it’s part, as David had his thumbs cuffed and was secured by padlocks into a canvas sack, he made his escape before the time was up to much applause.


Steve Kovarez’s humour shone through as he ‘played’ his way, along with his selected spectators, through a number of modern classics. A twisted card (ala Card Warp) started Steve’s set and carrying on this crazy visual theme an ace visually penetrated up and down through other cards in the most fairest of conditions. It was time to get some spectators involved as sponge balls were produced from just a purse frame, no bag! Vanishes, transpositions and multiplications played their part in this comical and magical routine. Steve borrowed a gentleman's finger ring and had it penetrating on and off an examined length of rope under impossible conditions, with the ring vanishing unexpectedly during these sequences and to the audiences surprise and the relief of the gentleman appearing on Steve’s own car keys.


Jeff Drayton is a natural comical performer and along with this talent he introduced us to another side of his humour involving cards and poetry! His first poem was about a lady that worked behind a bar in a public house and the ever magically changing faces of a pack of cards. With cards in hand Las Vegas was Jeff’s next recital with a fun version of the three card trick. Away from the cards, and in a flash, a string of silver beads was produced and Jeff twisted them, like with a balloon, into a small puppy dog with a poem to finish for good measure.


Paul Henri “Potty Paul” finished the competition with a fun and energetic entrance and ploughed straight in with the various effects that magicians are required to do. Vanish, had Paul vanishing a full bottle of coke. Card tricks, a chosen card had its back transformed from red to blue and then a second spectators card transposed and became that now blue backed card. Transposition, had a chosen coin, of two, vanish from the tight grip of a spectators hand to appear impossibly in a bottle held high by another spectator, impossible because the coin was to big for the bottle! Prediction, had Paul reveal that he knew the cards that would be selected earlier in his set and what they would be wearing. Penetration was Paul’s final illusion performed alongside one of his best buddies and well known magician Oliver Tabor, Oliver’s hand was removed from his wrist by two sharp blades and restored again. It was lovely to see this usually comic revealed effect presented as a true illusion as it received gasps from the couple I was standing by.


The competition was judged by five members of the public and was a close call but winning by one point was Edd Crafer (photo) and second was Jack Brister, the trophy's were presented by a specially invited guest Oliver Tabor. A big thank you goes to Peter and his team at the St Georges Hotel for their continued support and for being fantastic.