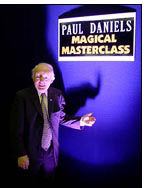 Let me say here at the start that I have no connection with Paul, before the course I rated him tremendously highly as a stage performer, but had never met him personally (unless you count being a volunteer on stage 25 Years ago), didn't know what to expect from something like this Masterclass, and to be absolutely truthful, wasn't expecting a great deal and almost didn't attend the event. As it turned out, this was in short, one of the best, if not the best, lecture/event I have ever attended, and not one trick taught all day. So what was taught and why did I rate it so highly?

It did exactly what it said on the tin. Some of the information I already knew, a lot I didn't, some was the "brick on the forehead" obvious stuff, that somehow we never seem to realise ourselves. All of it useful. All of it presented in a honest, enthusiastic friendly and downright entertaining way, by someone who's been there done that, got the t-shirt and the Bentley! Often including clips from his TV Show to emphasise a point. I can't imagine that any magician could attend this course and not get far more than his/her money's worth, both financially, and in satisfaction at the improved quality of the shows they will be giving

I am a working semi-pro magician, don't have too much available time to do more gigs than I'm already doing, so wasn't expecting to get too much practical benefit from the course. But I was wrong. Throughout the day Paul spent nearly 7 hours on stage breaking down how we can all get more out of our magic. The day was split into more or less hourly sections, headed:

Introduction - Your keys to success.
This certainly gave ideas and concepts which would multiply the benefit of the rest of the days information.

How to dramatically improve every trick you already own.
I can't imagine that any magician wouldn't want to improve his performances, here was information guaranteed to do that. This wasn't how to become the second Paul Daniels, but how any magician can Improve his/her effects.

How to easily make more money from every show.
Loads of ideas, many of them with no real cost or effort from the magician, all of which add value for the customer, and will make more money per show.

How to perform on TV, get on the radio and in the news.
I can attest from personal experience how beneficial to me a couple of mentions in local papers have been. The course explains fully how to get exposure in all forms of media. As well as giving very useful tips, which can be applied for instance on when TV, which otherwise would take years of experience, or a great amount of study. (Misdirecting a camera anyone?)

Developing your stage presence and persona.
Again tips from an ultimate pro, not just how he did it, but how anyone can develop and improve their performing character.

Questions and Answers.
Many good questions asked, all answered with humour, enthusiasm and apparently total honesty. Great bit here about misdirection in general, on stage and close up, including the "Ricochet" technique.

Included with the course was a CD Rom with loads of good stuff on it:
15 minute video section on misdirection. Extracts from relevant publications. Copies of all the slides from the day (still take a notebook though, there is SO much information to take in). List of magic resources on the Net.

Conclusions
If you want to improve your act, If you want to get more personal satisfaction from your profession / hobby, if you want to earn more money, and learn all about this during a tremendously entertaining day, go to the next available Paul Daniels Magical Masterclass. 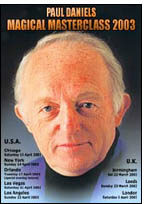 I went to the Paul Daniels Master Class with an open mind. Why? Because he has reached the top in Magic and has achieved what many of us only dream about.

The main reason for my interest in this event was because I heard that Paul would be looking at magic from a business perspective, which included sales and marketing – that happens to be my own background as a Sales and Marketing Director with a large Multi-national Company.

Prior to attending, I was a little concerned because I had heard rumours that Paul would only be speaking for a small part of the day. How wrong they were! After a brief introduction from the organiser, Paul spoke for the entire day, and with few exceptions he held the attention of the audience the whole time, which in itself says a lot.

In his introduction Paul explained how he is often misunderstood by fellow magicians as well as the media. However, his unique style of humour and somewhat eccentric ways are totally understandable when you hear about his background and the way his career path developed. Hearing him speak openly and honestly, there is no question that he is a genuine person who has a lot to share with those who have an open mind. Like all of us, he admitted that he wants to be liked (who doesn't?) and he still gets upset by false stories and rumours which tend to be started mostly by bitter or envious individuals. I know that my perception of Paul had been somewhat coloured previously, but I now have the utmost respect for the man. He is a genius at what he does, no question about it.

As the first session commenced, the introductory video clips of various well known American magicians was interesting because they were saying how highly they thought of Paul. Most of them credit Paul as the person who either got them into magic, helped them get their big break, or who taught them in the first place. It made me think how ironic it is that most British magicians hold these American guys in awe, but they in turn hold Paul in awe! Could it be that we are too familiar with Paul that we have lost sight of his achievements? When you think about it, his magic career as a whole is incomparable.

Talking to Andrew Lock, Paul’s assistant, I found it interesting to learn that in the USA, where a number of Masterclass events are scheduled, most of the top earners in magic - the millionaires of magic who appeared on the video I just mentioned, are booked in to attend, whereas in this country relatively few professionals apparently have done so. I can't help thinking that there is a certain proud attitude amongst many British Magicians of "what could I possibly learn? I'm a professional, I don't NEED any advice!" It is sad that this kind of attitude exists, I suspect there is probably a certain amount of jealousy involved, and there is no question that even if you are at the top of your field, there is ALWAYS more to learn.

Perhaps some of us ought to re-evaluate our thinking because I went with an open mind and came away with plenty of useful points and reminders of things I knew but hadn’t put into practice. Could it be that the reason why the Magic Millionaires are where they are now is because they are prepared to admit that they don’t know it all, and have an open mind to continue their learning from other professionals in the same field?

In one of the sessions Paul spoke in a very positive way to various magicians who are currently on TV. He said, "I know that many of you are thinking and saying, 'how come Marc Paul got on Parkinson?' or 'why should Derren Brown have his own TV series?' The fact is they ASKED! That's where these guys have the edge. They have really worked at it and acted on their desires." Paul went on to show how everyone present had the capability of achieving MUCH more with their magic, but that they had to take action. He made a good point that hit home to everyone present - no one is just going to phone us up out of the blue and invite us to appear on TV!

At times it was difficult to keep up with the flow of ideas and techniques that Paul presented which might sound like a criticism, but it’s actually a compliment that there was no waffle or padding as one might expect from a day long event. The tips and ideas really did come thick and fast, and there were some absolute gems. As an example, one suggestion was to put together a simple magic book to sell after shows. Paul explained how to do this very cheaply, and showed how the extra profits can double what you were paid for the gig in the first place! How many of us do that?

Yes, it was a long day, but regular short breaks helped to keep our attention focused on the sessions, and in my view it was superb value for money. Paul was warm and friendly, very honest, and his team did an excellent job to make everyone feel welcome. Debbie was there too, and she was equally approachable - during the breaks she could often be seen offering tips and encouragement to some of the females in attendance.

Something else that impressed me on the day was that after the final session, a large group of magicians hung around for awhile, and continued to pick Paul’s brains on various subjects. By that time, having spoken for some 7 hours he must have been ready to drop, but he was happy to oblige, and it was almost like a second mini conference going on after the main event!

Paul's enthusiasm was totally infectious throughout, and he left us all on a real high, determined to improve every aspect of our magic. It’s probably the most useful and entertaining lecture I have ever attended.